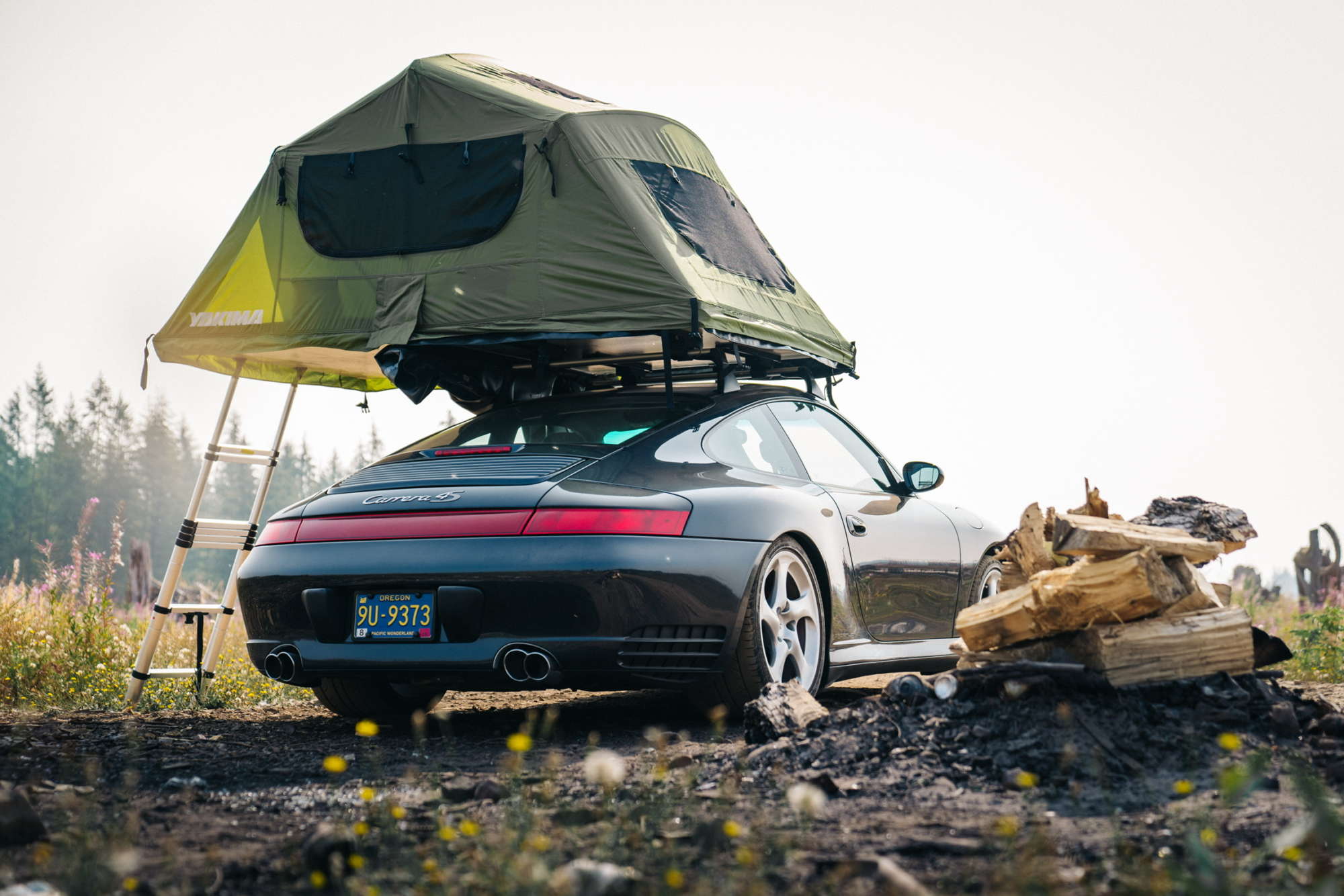 There are no excuses. Get out and do a Porsche 911 road trip!

Porsche 911 and practicality. That always fits well together. Hardly any other sports car is more versatile. This is proven by many Porsche 911 stories from the last decades. The fact that a 911 also makes a great figure as a camping car has not occurred to us so far. Until we discovered the story of Brock Keen. He and his wife used their 996 for some really special road trips. We talked to Brock and let him tell his story about his extraordinary Porsche adventures.

Hey Brock! We’ve discovered you or better said, your car on Instagram. After seeing some pictures of your special adventure 996, it quickly became clear that we really wanted to interview you.
Thanks for having you for this Elferspot-interview. A simple question at the beginning.Who are you?

I’m a entrepreneur, business owner, an avid “roadtripper” from Portland, OR, USA. I spend as much time as possible behind the wheel or out in nature here in the Pacific Northwest.

I spend as much time as possible behind the wheel or out in nature here in the Pacific Northwest. Brock

It seems you have a big passion for Porsche 911. How came it?

I was 8 or 9 years old and a school friends parents owned a grey 928. Her dad was a farmer and always kept it in the corner of a large barn. At first I wasn’t sure what it was since it was under a cover but I knew whatever it was I liked the shape. One day it was in the driveway and as it turned out it was the car my friends mom was going to take us to the fair in. That was my first ride in a Porsche. I was tucked into the rear seats for the drive and I can remember leaning forward and looking at the speedometer cause it felt like I was in a rocket ship… the needle was in the triple digits. My parents probably wouldn’t have been happy to find out about that but from that point forward I was hooked. So interestingly enough it all started with the 928 but I soon discovered the slant nose 930 and after that a 911 was the only sports car I was interested in. It was probably another 7 or so years before I was able to have another first hand Porsche experience…this time with a 911. Another friends dad had a RUF 964 Turbo. After that ride I was 100% determined to own a 911, it was the greatest car experience I had ever had and from that point on I was sneaking a peak at it any chance I could. I’m of the firm belief that if you commit something to your thoughts you can manifest them in your life. It took a few more years and again Porsche entered back into my life. This time in the form of a 1997 Boxster, after that it was a 2002 Turbo followed by a 993 C4S. After the 993 was no longer in my life I was Porscheless for a few years (far to long) A couple year ago my wife and I began looking for the next one. We weren’t looking specifically for a 996 but when we came across this C4S it checked almost every box and we just couldn’t pass on the value for the money. This is where the 996RoadTrip story begins. 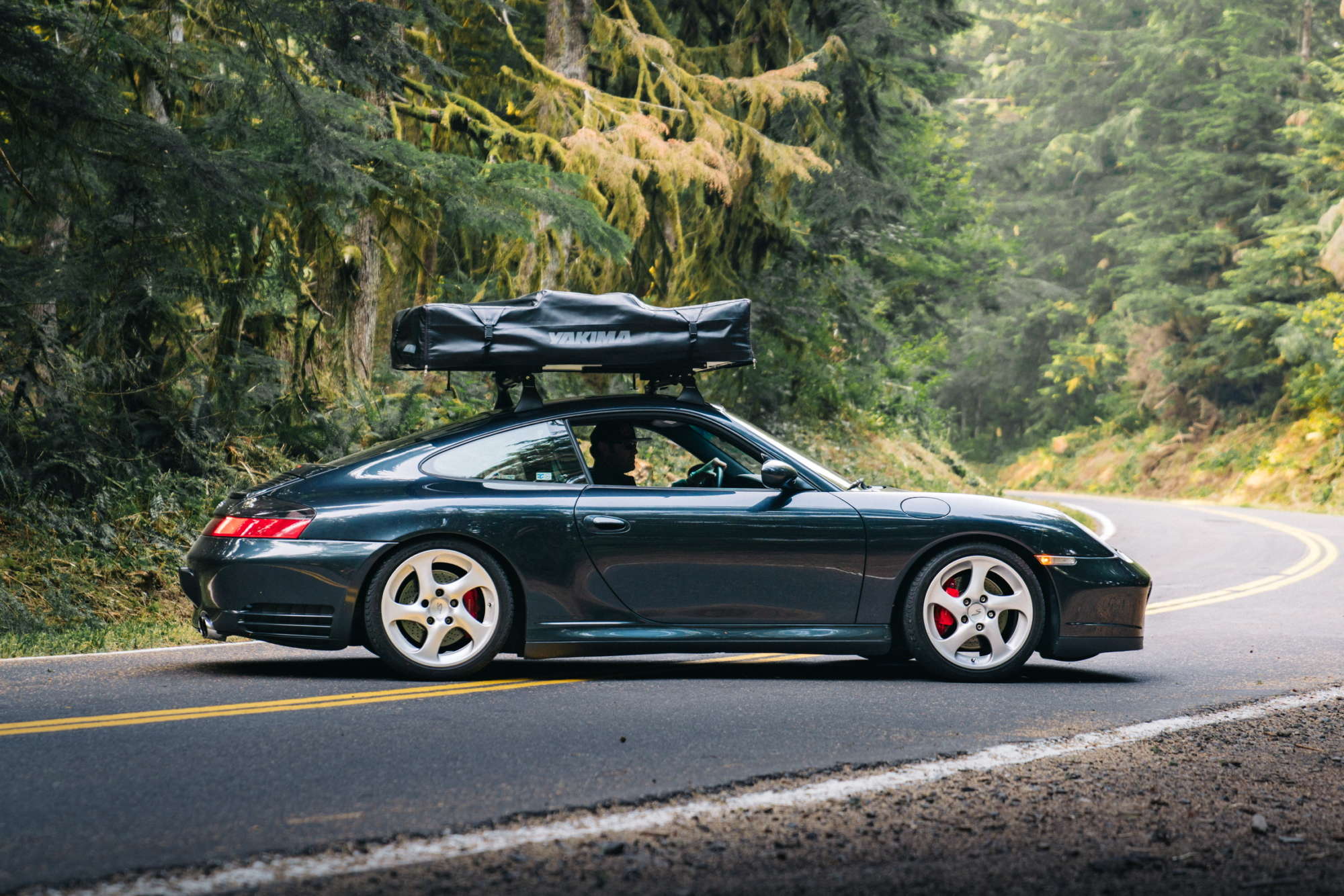 You drive a 996 Carrera 4S. That alone is not really exceptional. But the roof construction and what you do with the 996 is probably unique. Please tell us more about it.

Well, the original intention for the Porsche 996 Carrera 4S was to simply replace our Audi S4 as the 4 season, multi-purpose, daily driver but that escalated to a new level when I was at our local outdoor store and spotted a roof top tent for a price I couldn’t pass up. I bought it without really thinking and quickly found that I would need to order some special mounting hardware to attach it to the roof rack of our old Range Rover.

I thought if it’s possible, why not merge a couple of my favorite things together… spirited driving and camping.

After some quick thinking I figure out that it would easily mount to the roof bars I had on the Porsche so I drove home, swapped cars and went back to pick up the tent. Let me say, I got a lot of strange looks on my drive home. This small situation of how to get the roof tent home is how the idea really started. I thought if it’s possible, why not merge a couple of my favorite things together… spirited driving and camping. I could enjoy great mountain driving roads then at the end find a camp site, open up the tent, build a campfire and do it all again in the next day. This is my version of the perfect day. 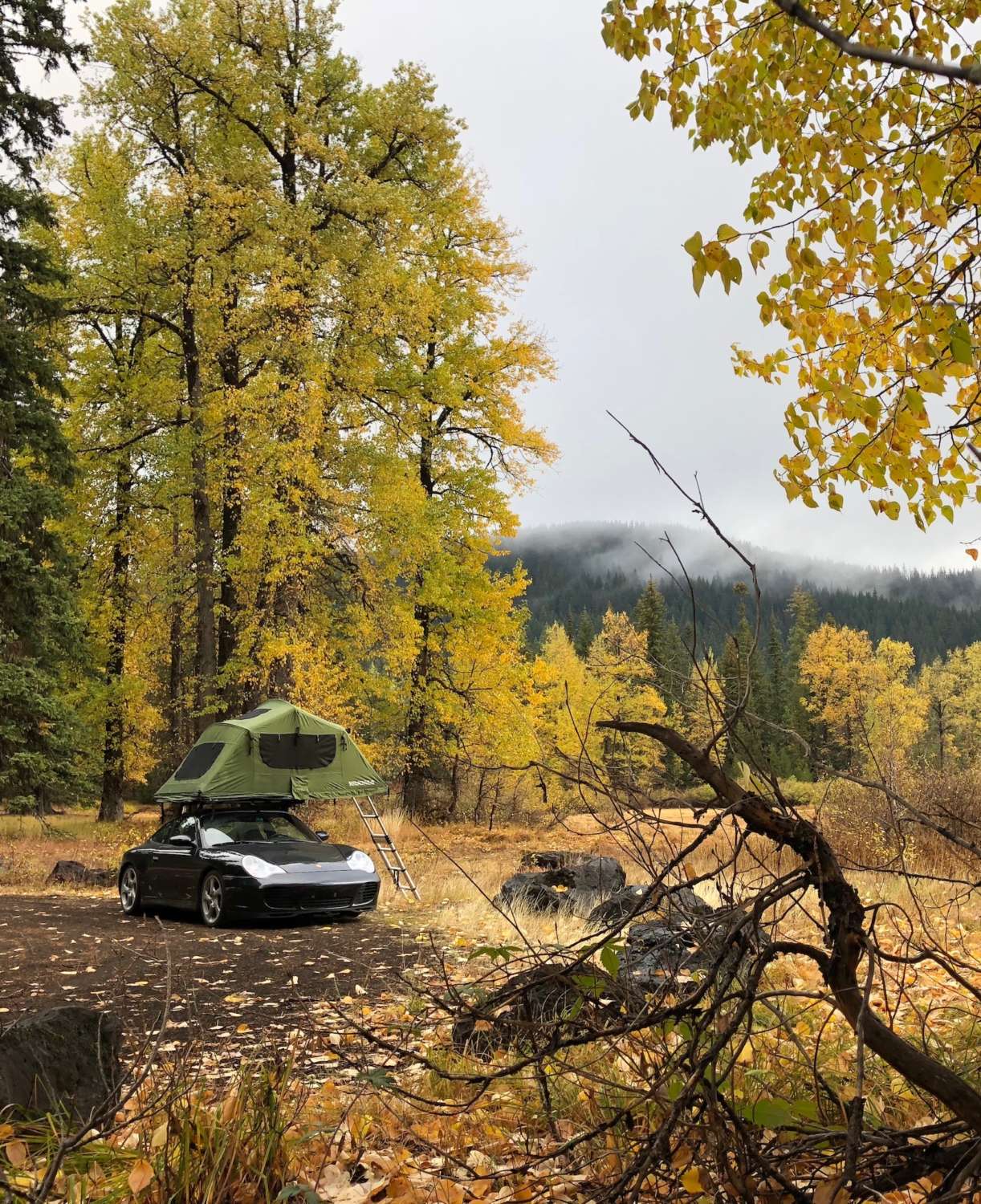 The question that pops up immediately is whether the roof has no problems with the weight of two adult persons?

This is probably the question I get most and it was something that I was concerned about as well. Fortunately Porsche tends to over engineer most things they touch and this was also the case with the roof structure on the 996. When I decided I wanted to keep the tent on the Porsche I started to do more research on the subject and found the the dynamic weight limit was 165lb (75kg). The Yakima Racks tent only weighs 110lbs so I felt comfortable leaving it up there. After convincing my wife to climb inside and test it out and then getting our 50lb dog up there with her things seemed pretty solid and no damage was being done… it was time for a real world test. We took it on its first overnight trip the next day and I snapped a few photos to share on my instagram account. I wouldn’t say they went “viral” but they did get the attention of Yakima Racks. They were intrigued but also a little concerned about the safety. Since Yakima Racks is a local Portland company they invited me to come by their world head quarters so they could get a closer look and let there “Fit Team” give the setup and thorough testing. After a few hours of testing they came back with some very nice things to say, one being that the 996 is Yakima certified (“no other rooftop tent is certified for specific vehicle fits”) Another first for Porsche in my book! 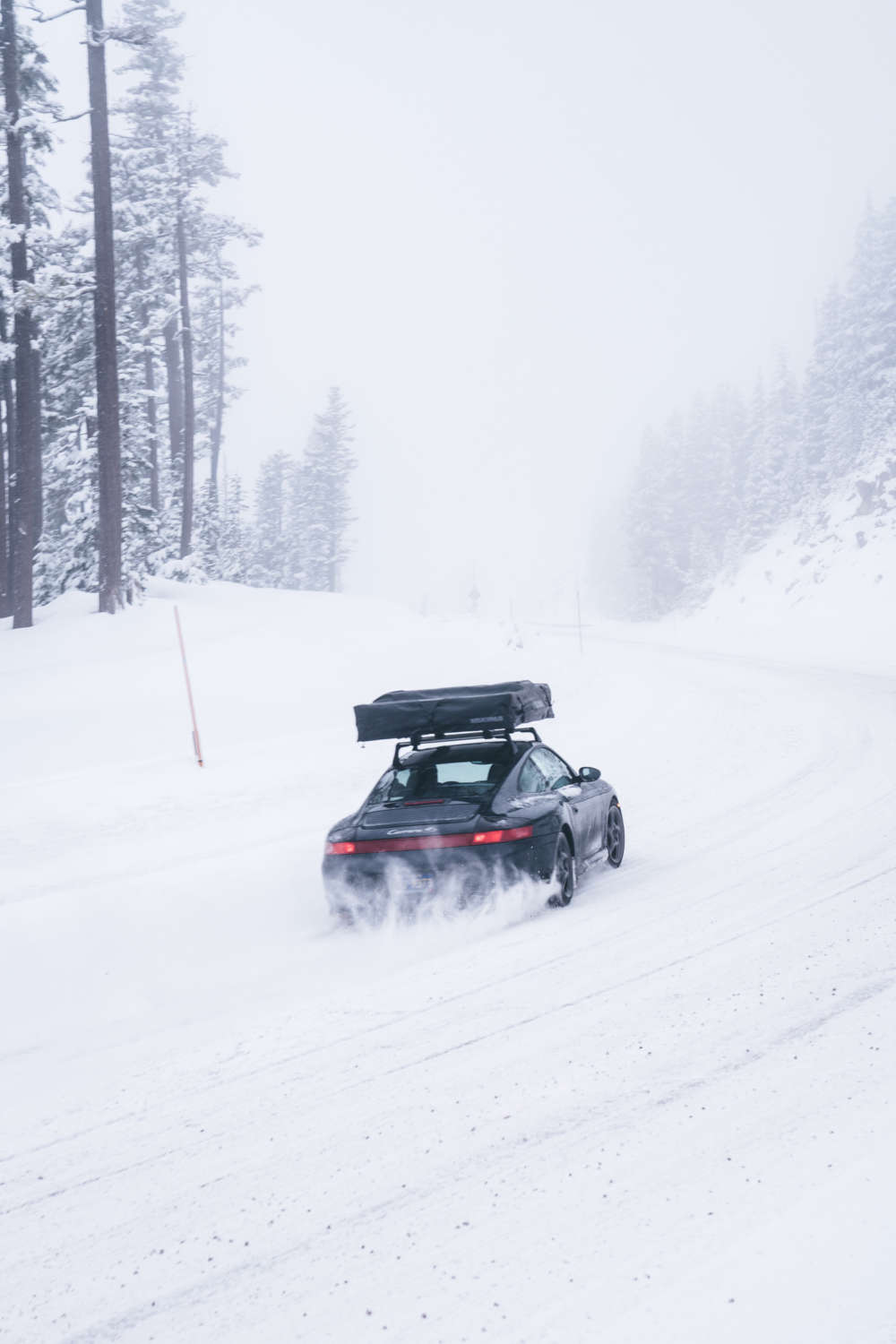 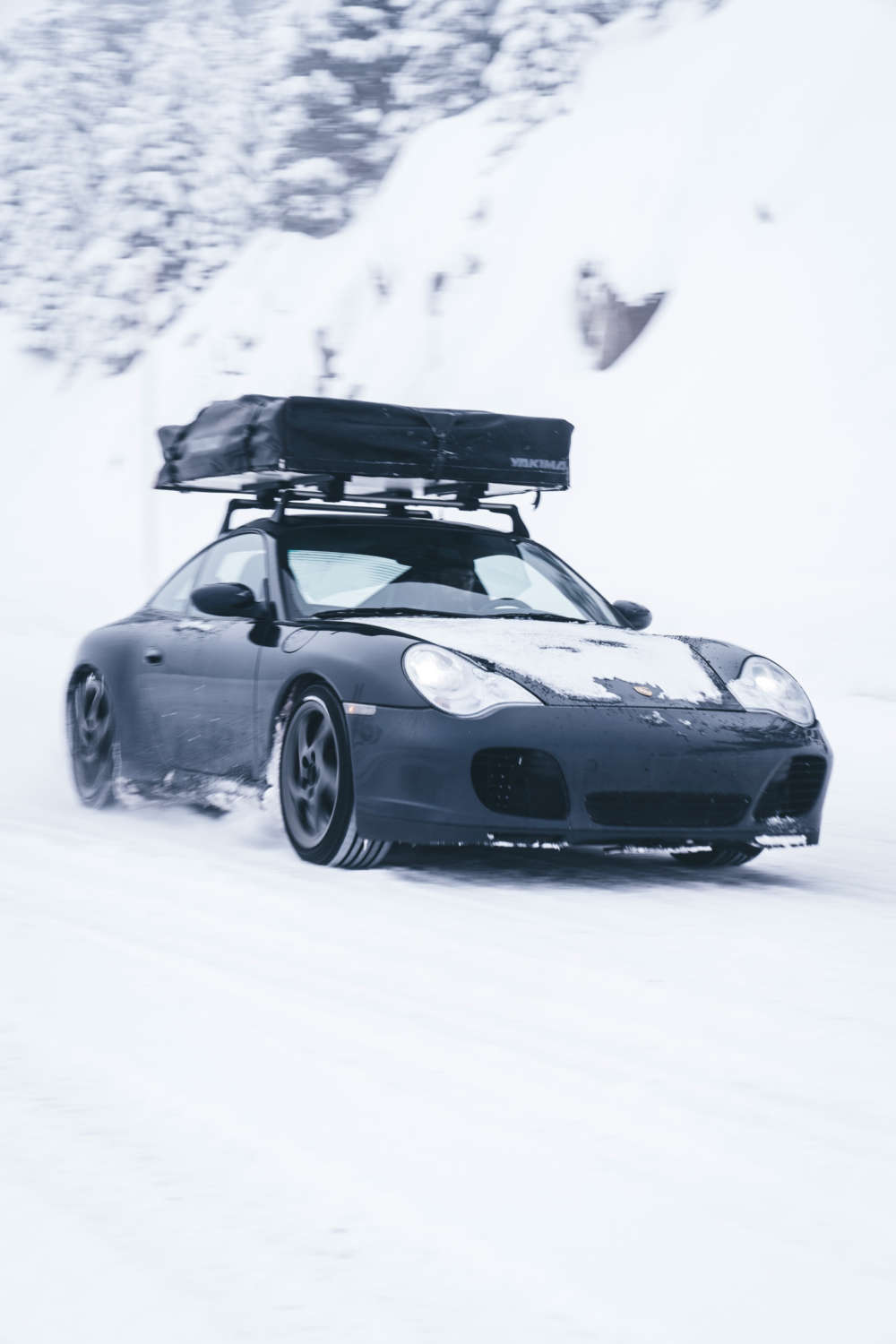 What was the most exciting thing about this road trip? Are there any anecdotes about special experiences?

The first road trip wasn’t something all that notable with the exception it was done with a rooftop tent on top of a Porsche 911. But once I had established that it was a viable and practical option the real road trip was about to happen. Coincidentally Rennsport Reunion was coming up and what better way to give it a real world test than a 1500 mile road trip to Porsche’s 70th Birthday party! I made sure to map my route down the scenic coastlines of Oregon and California. My first night was spent camping under 300ft tall trees and let me say. Very few 5 star hotels can match the views you get when waking up in the places I can set up camp in this car.

What better way to give it a real world test than a 1500 mile road trip to Porsche’s 70th Birthday party!

By the end of the next day I had arrived at Laguna Seca and while I might have been driving just a 996 C4S I was the only Porsche out of hundreds and hundreds that had a tent mounted to the roof! Needless to say I was receiving some strange looks and a lot of questions. I hadn’t really planned this trip out too far in advance so all of the hotels and even the campgrounds were reserved. I decided to bend, maybe break, some rules and went to see if I could drive the famous 17 mile drive of Pebble Beach. Lucky for me the guard at the gated entrance just smiled and waved me by. The sun was setting and there weren’t that many people around so I decided to take a risk. I found a secluded area near one of the beach view points, parked the car and opened up the tent. The cost of the tent was paying forts ten fold! 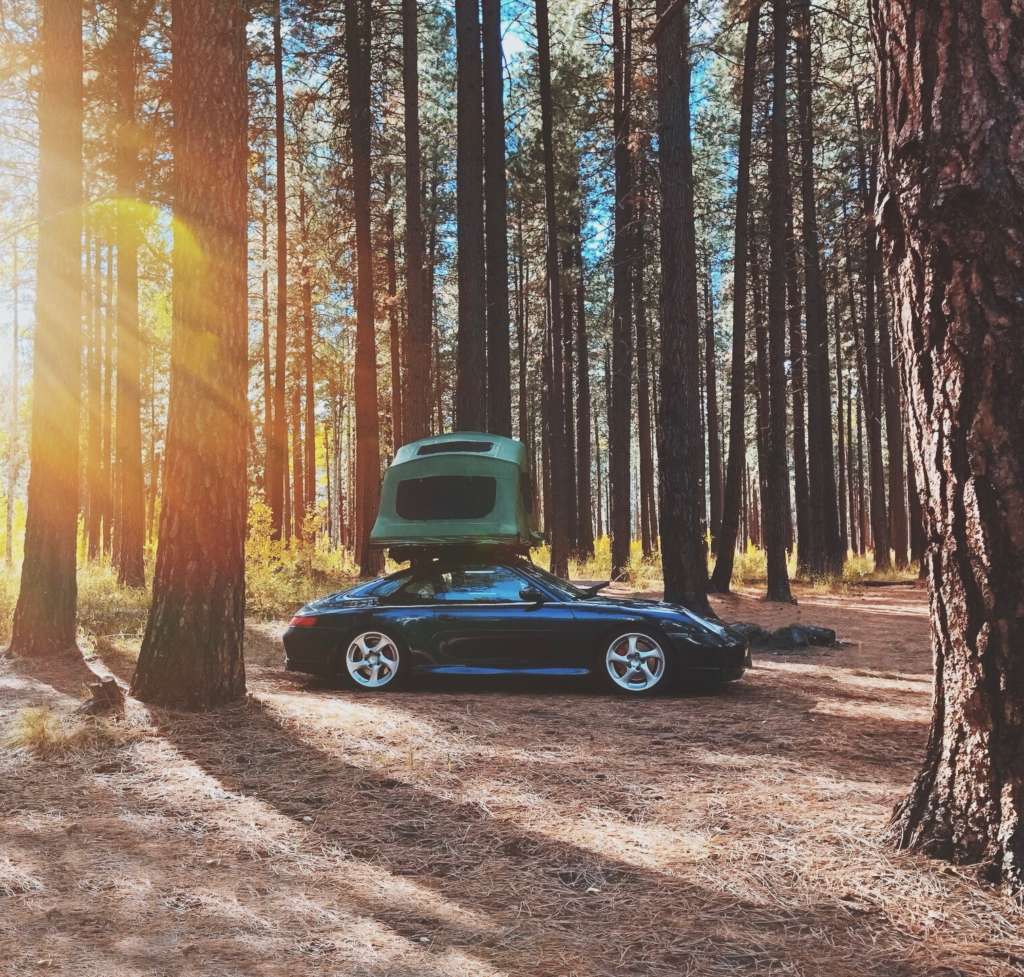 How satisfied are you with the 996? Would you recommend this series?

I’m very satisfied with this 996. I recently drove a 1999 C2 and it’s incredible how refined the 996 cars became over the course of just a few years. Being that its the 996.2 generation and the fact that its a well optioned C4S also makes a big difference. The hydraulic clutch, the e-gas and the PSM create a entirely different driving experience compared to the the earlier 996’s. For me, and the amount of driving and road tripping we do this is the perfect car for our active lifestyle.

For me, and the amount of driving and road tripping we do the 996 is the perfect car for our active lifestyle. 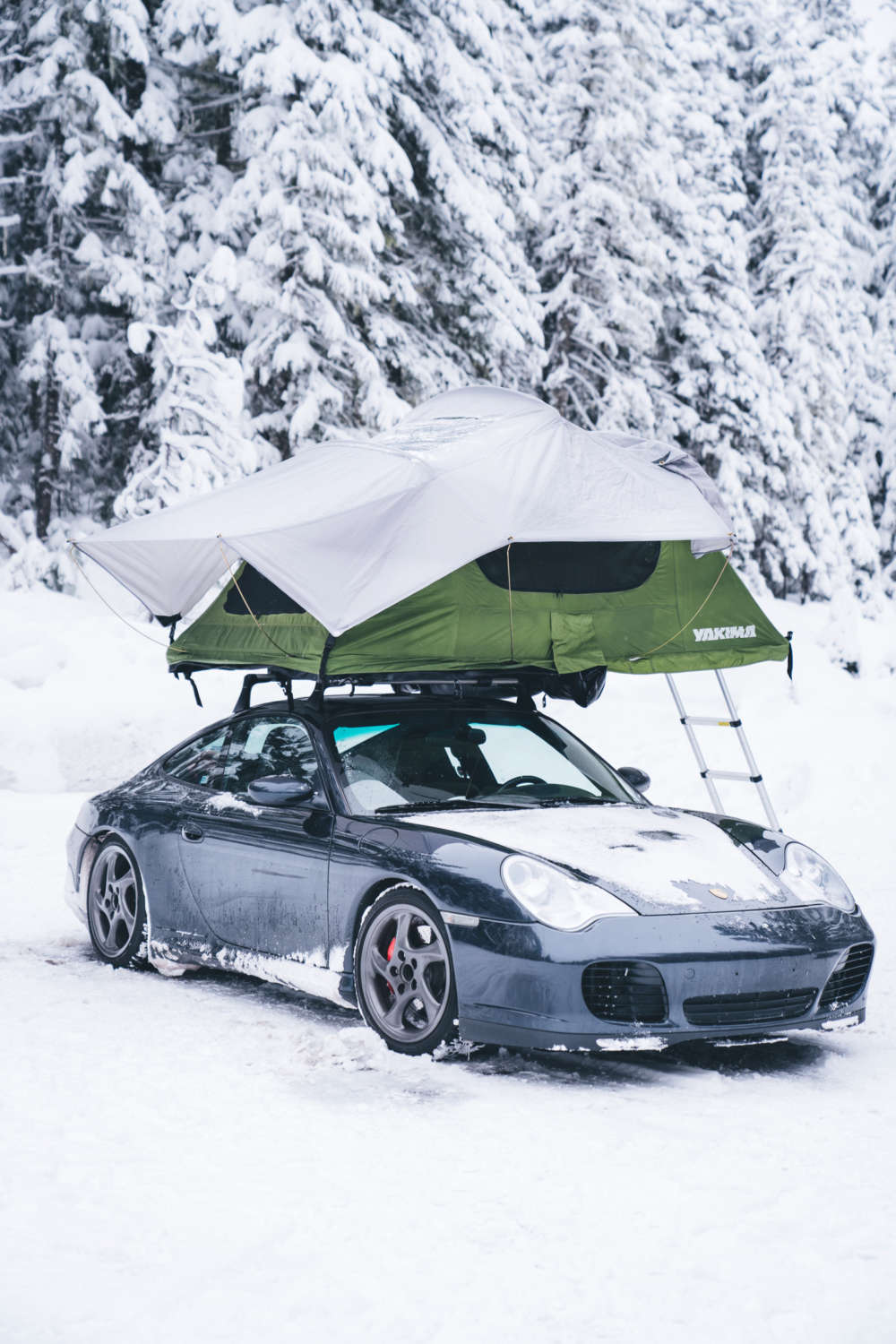 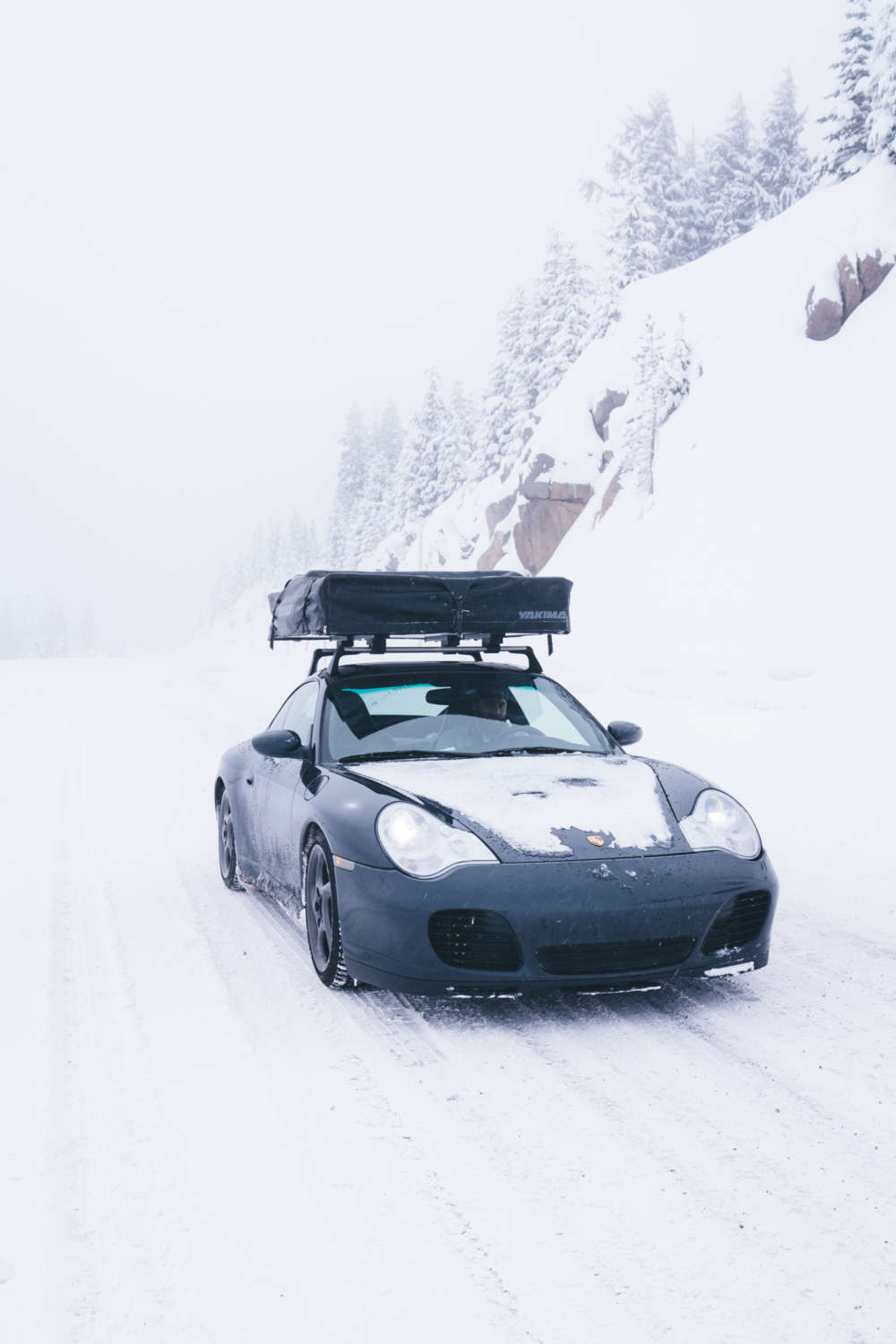 I can only pick one huh? That’s a really tough question but I think I would have to go with a ’73 Carrera RS. The early cars have such an incredible personality and the RS was the pinnacle of the early cars. I just so it’s known, it wouldn’t be a garage queen! I would drive it, track it and enjoy ever single mile.

Many thanks, Brock. It was a pleasure speaking to you.

It was my pleasure, thank you for reaching out. 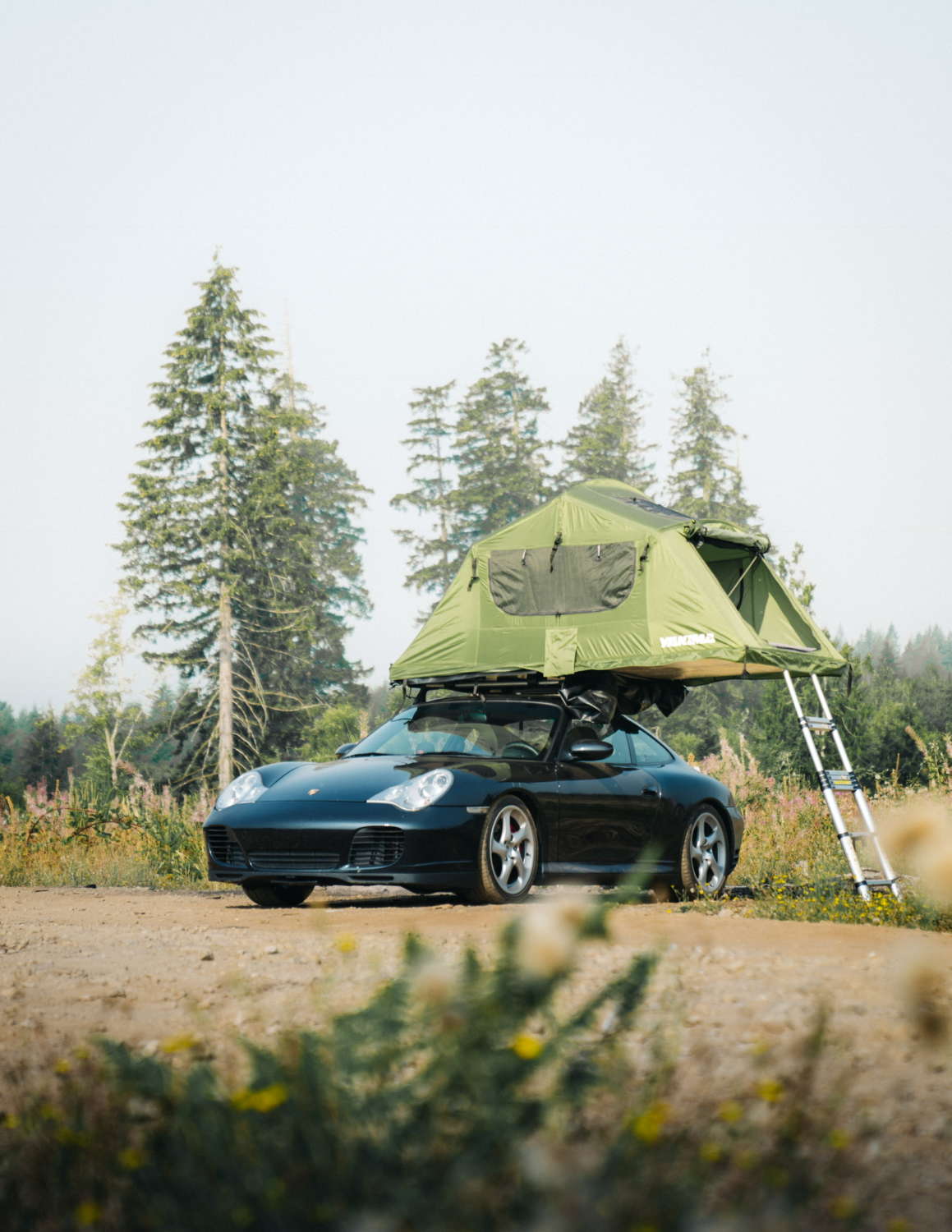 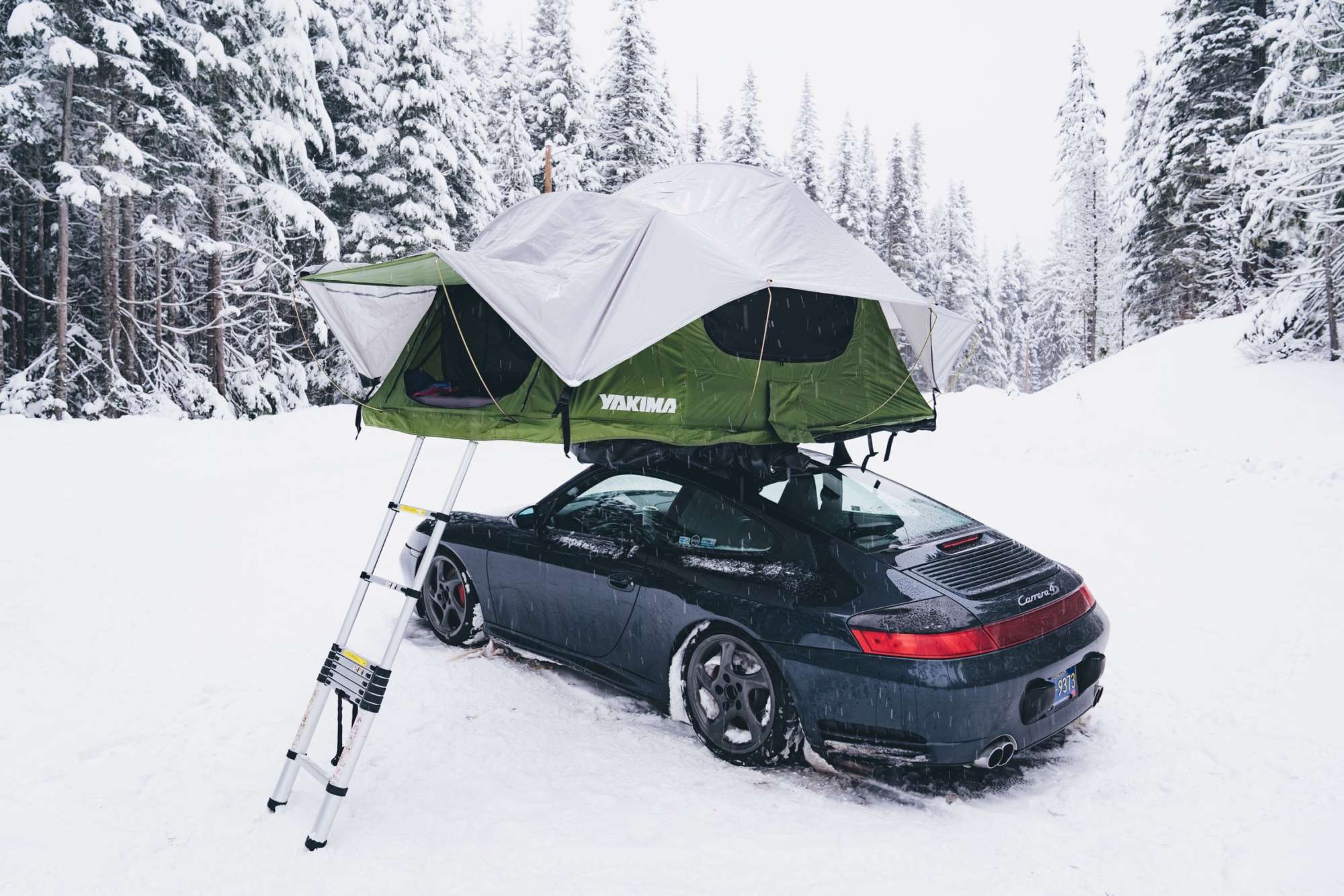