A vehicle rarely reflects the zeitgeist of the early 90s in a more stylish and exclusive way than a Strosek Mega Speedster.

The internationally renowned industrial designer Vittorio Strosek - under whose leadership Strosek had probably the broadest range of aerodynamic components for Porsche sports cars between 1982 and 2004 - dedicated his work primarily to sharpening the vehicle design. He usually left motor optimization or tuning in the traditional sense to other providers. The organic design and the reduction in the frontal area associated with the Mega Speedster model not only show the signature of his teacher Luigi Colani, but also underline the pleasing Porsche curves so skilfully that the remarkable increase in vehicle width is hardly noticeable. Rather, the overall composition of the car looks much more powerful than the original product, but without being intrusive. 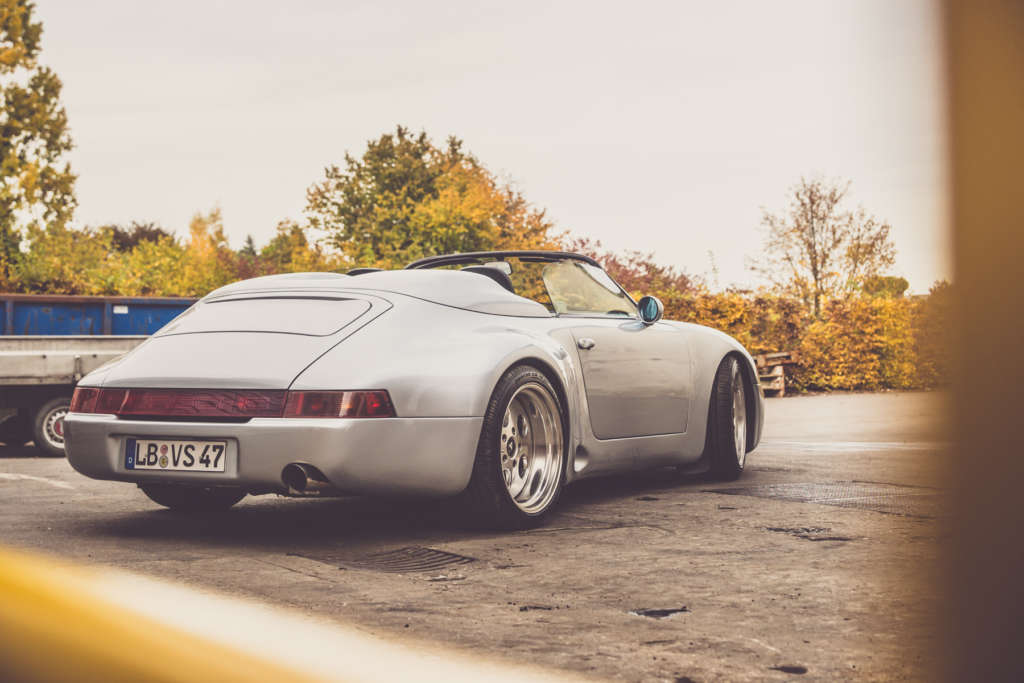 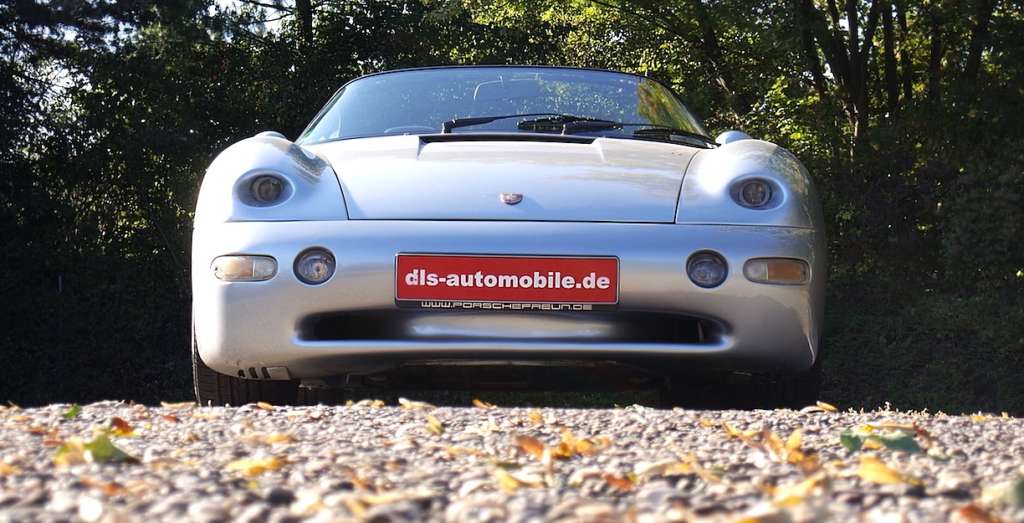 According to statements by the former secretariat of Strosek, a total of 15 factory-made “Mega Speedsters” were built on the basis of the Porsche 964 Speedster - by the way, exactly the same number as 964 Speedsters with a factory turbo look left the main plant in Zuffenhausen.

The Strosek Mega Speedster was seen as a brilliant eccentric among the Porsche exotic cars, especially among the emerging elite of the “dotcom millionaires” of Silicon Vallyes.

This is also proven by the sales figures. According to the former Strosek importer for the US market, racing stable owner Fred Opert, a total of eight Strosek Mega Speedsters based on the 964 Speedster were imported to the USA - more than half of the total production. Every vehicle was different, each adapted to the individual requirements of this illustrious group of customers.

The history of seven of these vehicles is still transparent, but one vehicle is suitable for a Hollywood-style screenplay with a star cast: The Strosek Mega Speedster 3.8, the so-called "California car".

The history of this vehicle, which was moved exclusively in California between 1993 and 2014, is strongly interwoven with at least four other US Strosek Mega Speedsters and shows the social class in which these rare vehicles were located.

To describe the history of the creation of this car, the background story must also be briefly examined:

The first Strosek Mega Speedster imported to the USA, the promotional vehicle by importer Fred Opert, a maritime blue car, was sold to the famous baseball player Sandy Alomar. Although he loved the car, he didn't like the color (he called it "Smurf" - Smurf) and then had it repainted by Fred Opert in the Porsche color "polar silver metallic". This car served Sandy Alomar as a lucky charm for his games with the Cleveland Indians. It was not uncommon for Sandy Alomar to take the Strosek Mega Speedster onto the field shortly before the start of the game and hereby did a round.

The son of an Indonesian billionaire family, who was studying in California at the time, was sitting in the stadium during one of these high-profile rounds.

At first glance, he fell in love with the Strosek Mega Speedster and then contacted the Strosek importer Fred Opert.

Opert turned to the official Porsche dealer Jack Daniels, who could no longer order a vehicle from Porsche AG (the 964 Speedster series was now sold out), but still had a grand-prix white Porsche 964 Speedster as an exhibition vehicle. The car had - with a total of 31 (!) M numbers - very extensive equipment, including the coveted RS seating system and a limited slip differential, and was therefore eligible for purchase (at that time the original price was around USD 60,000).

After the purchase was processed, the car was then sent directly to the Strosek company in Utting, Ammersee. Between autumn 1993 and spring 1994 the body was rebuilt (in the “Strosek Mega Speedster” variant, the front fenders, the side skirts and the rear fenders consist of only 1 piece!) The car was repainted from grand-prix white to polar silver (paint shop Kube) , and provided with a removable Strosek hardtop (conversion costs approx. USD 50,000, confirmation of the factory conversion is available).

Now the car not only looked similar to Sandy Alomar's car, the individualizations made by Strosek even went beyond the "Alomar car".

Not enough, because the young Indonesian missed an additional piece of performance in his new Strosek Mega Speedster. Of course, only the best of their kind came into question - and in the United States at that time these were clearly the specialists from ANDIAL, who upgraded the engine of the Strosek Mega Speedster to the 3.8 liter variant that had been tried and tested in motorsport (technical description of the conversion from ANDIAL confirmed).

According to the Strosek importer, only eight of the eight US Strosek Mega Speedsters were equipped with the 3.8 Andial motor.

The car was only driven about 6,000 miles by the Indonesian first owner, and was accepted in 1996 by the Strosek importer Fred Opert. The sales invoice to the second owner (approx.USD 90,000) and numerous maintenance bills from a specialist workshop are available and prove that the car was moved in California until 2014. With a mileage of approximately 91,000 miles, the car was sold to the current owner in Germany in November 2014.

It is still in the delivery condition as the first owner took over from Fred Opert in 1994, that is, also with the same engine / transmission unit as for the first Porsche delivery.

The vehicle is accident-free and in a technically and optically excellent overall condition. In addition, it is a parade example and eyewitnesses of the 90s. Finally, one should not forget - the original price of the base vehicle at that time almost doubled due to this conversion to the Mega Speedster!
If you are interested in a documented and professionally flawless retrofit to the "normal" 964 Speedster with 3.8 liter machine, we can also make you a fixed offer. Please contact us if you are interested. 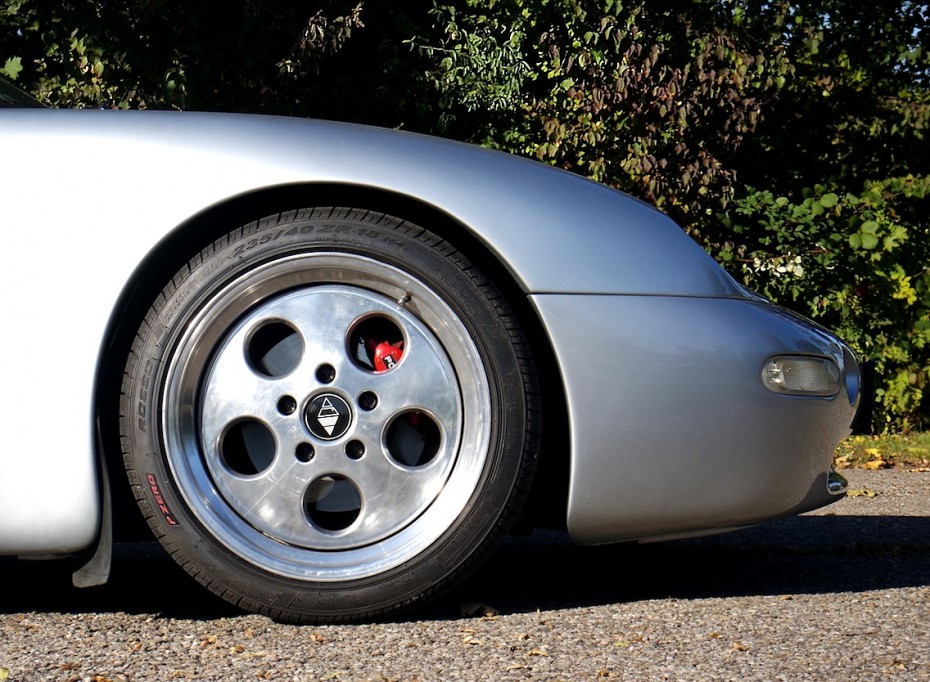 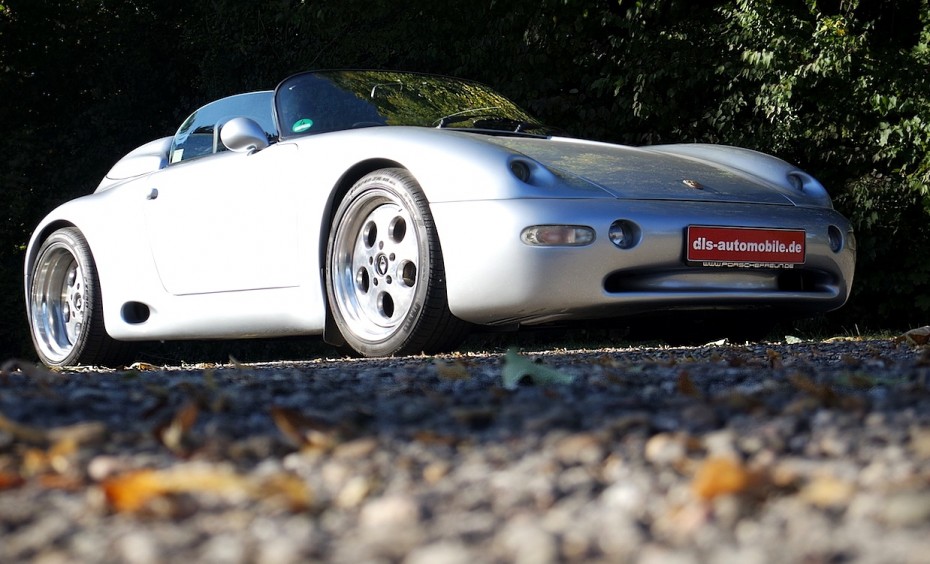 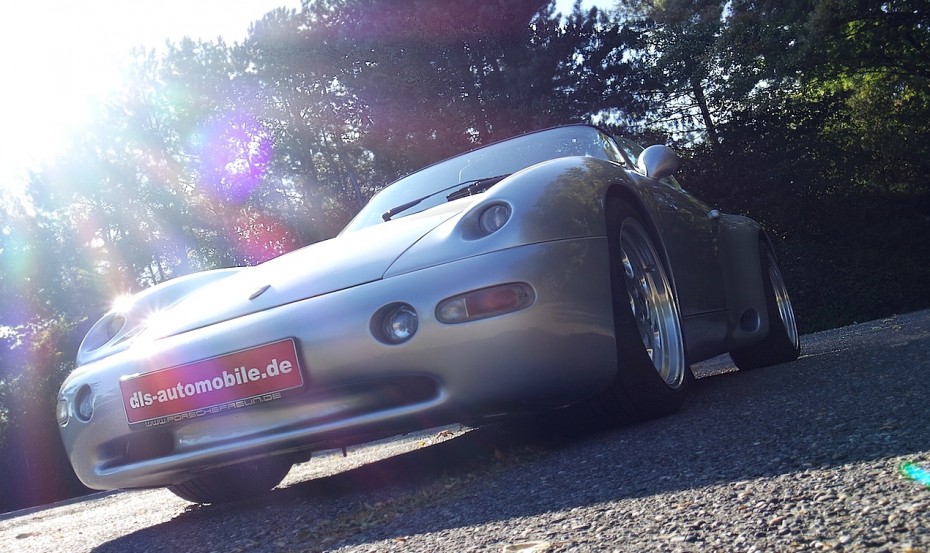 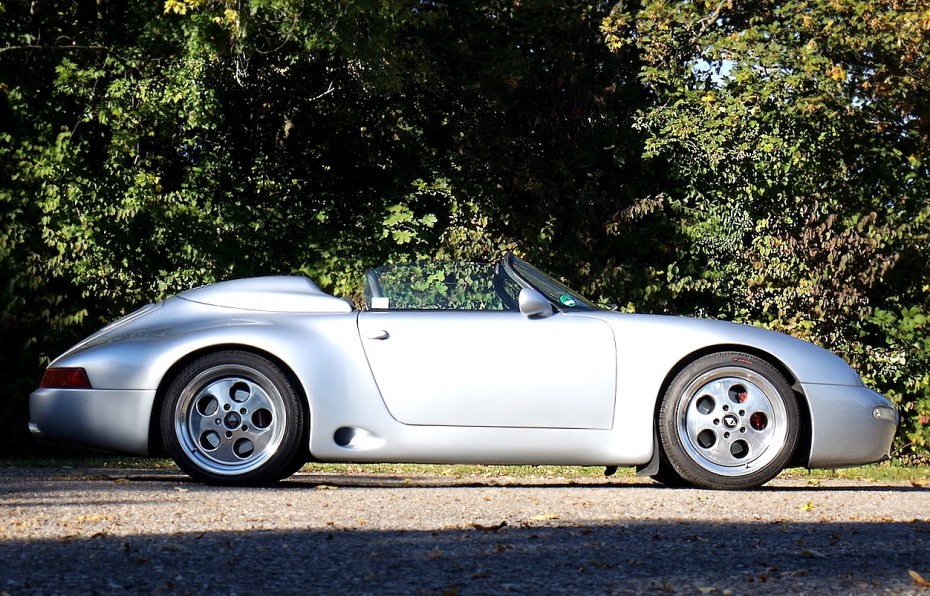 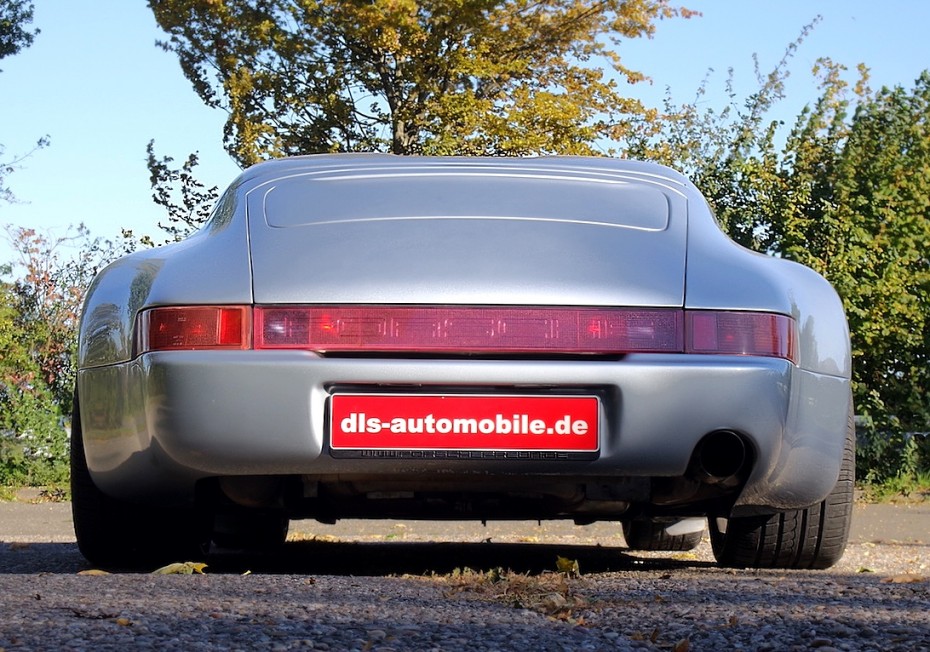 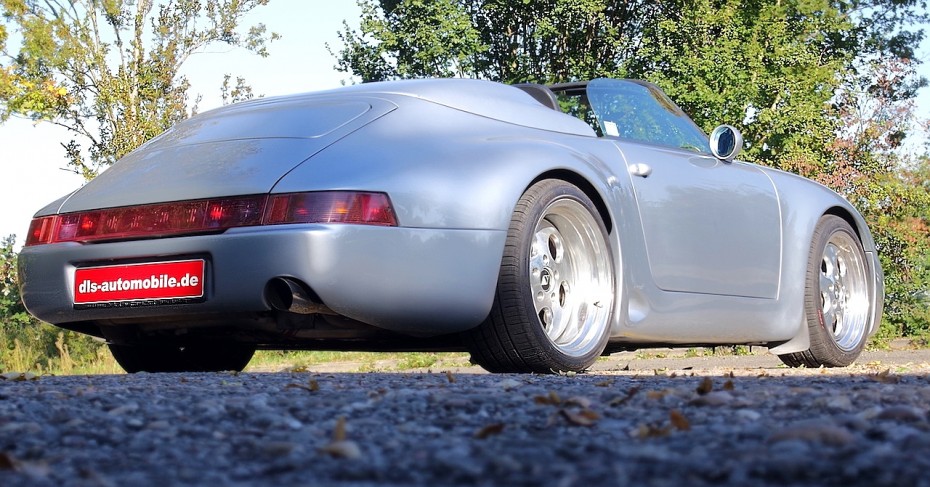 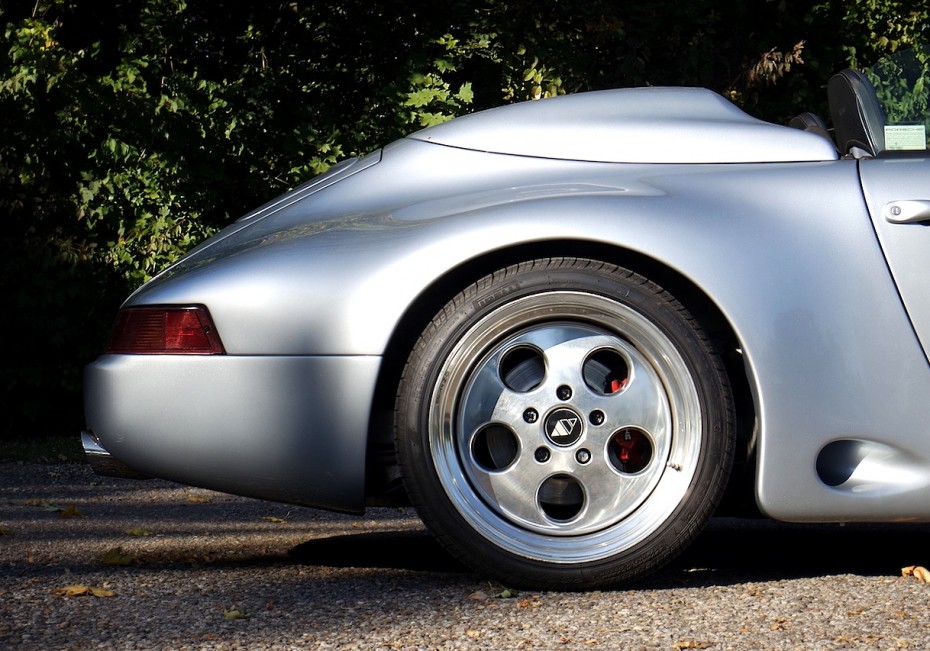