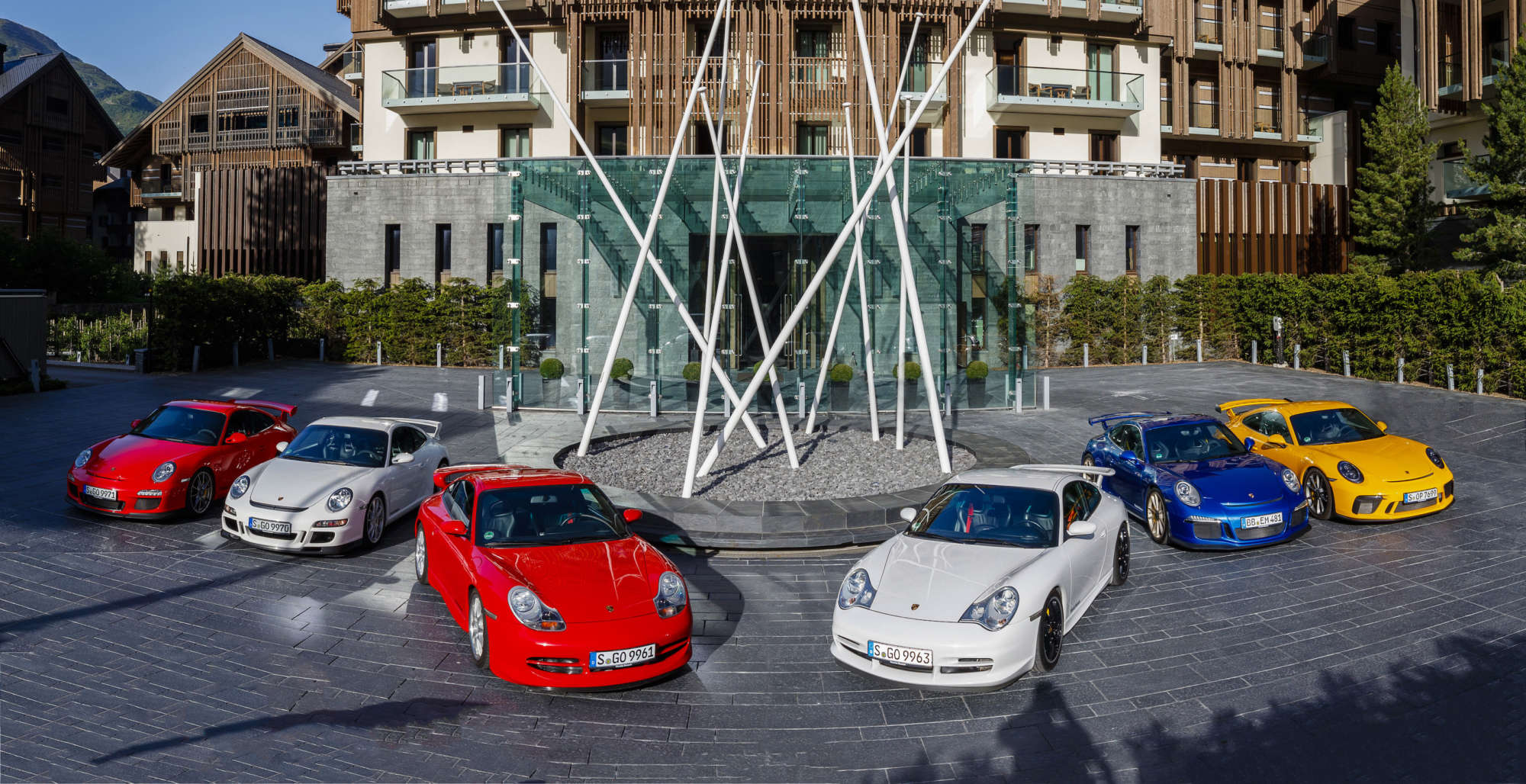 If you ask a petrolhead, which car would be the perfect choice for driving to the track, put in blistering laptimes and drive back home in it, you’ll probably get one answer quite often: The Porsche 911 GT3. But why is that? What makes the 911 GT3 so special? Let’s look back at 20 years of GT3.

The naturally aspirated sporty versions of the aircooled Porsche 911s were called Carrera RS. With the introduction of the first watercooled Porsche 911 that label disappeared. From that moment, the free breathing, road going race cars got a new name: Porsche 911 GT3. That resembles to the FIA GT3 class, which the cars were aimed to compete in. But the Porsche 911 GT3’s recipe for success was the same as it was for the Carrera RS. It unites all GT3 models an is describe best as: Low weight and high revs, reduced to the essentials. 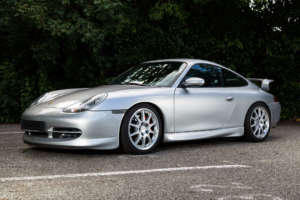 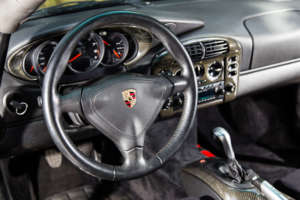 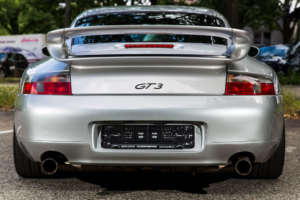 Based on the narrow Carrera body, the Porsche 996 GT3 defines itself with bigger brakes, the aero kit and very light bespoke alloy wheels. Besides the beefed up suspension, a limited slip differential came as standard. On the inside however, there were no back seats, no automatic air conditioning and no rear speakers. But the two zone air conditioning and the rear speakers could be ordered as a no cost option, as well as the Clubsport package with a roll cage and all sorts of motorsports parts. The free Clubsport package has been a free option for every single GT3 until today.

4,8 seconds from 0-62 mph, first mass produced 911 with a top speed of over 186 mph, one of the first roadcars to lap the Nürburgring in under 8 minutes in the hands of none other than Walter Röhrl. Those are the key facts of the Porsche 996.1 GT3. Roughly 1,900 examples were made.

The target of selling 1,300 GT3s in the first generation was overachieved by some margin, so Porsche brought a new 996 GT3 after the 2002 Facelift. As a result of consistent development, the 996.2 GT3 pushed out 21 hp and 15 Nm more than its predecessor. Moreover, the rev limit was pushed to 8,200 rpm and 0-62 mph only took 4.5 seconds. Besides the now 190 mph top speed, the car had the new facelifted headlights, new rims and a revised rear wing to offer.

Although the 996.2 GT3 weighed 30 kilograms more than the first 911 GT3, its performance got a slight upgrade thanks to the power increase. The optional ceramic brakes (PCCB) saved yet another 20 kilograms of unsprung weight. The rotors themselves got a little bigger in diameter, with 350 mm at the front and 330 mm at the rear. Interior wise, just as the 996.2 Carrera, the second generation GT3 finally got a glove box.

Despite its outstanding performance figures, enthusiasts asked for an even more sporty version of the Porsche 911 GT3. Zuffenhausen’s engineers went back to the drawing board again and Porsche launched the first iteration of the 911 GT3 RS. Thanks to a lightened flywheel and, ironically, the loss of the glove box, the RS weight around 20 kilograms less than the 911 GT3. From the oustide, the GT3 RS could be identified by a special GT3 RS livery on the side skirts, painted in the same colour as the special wheels. 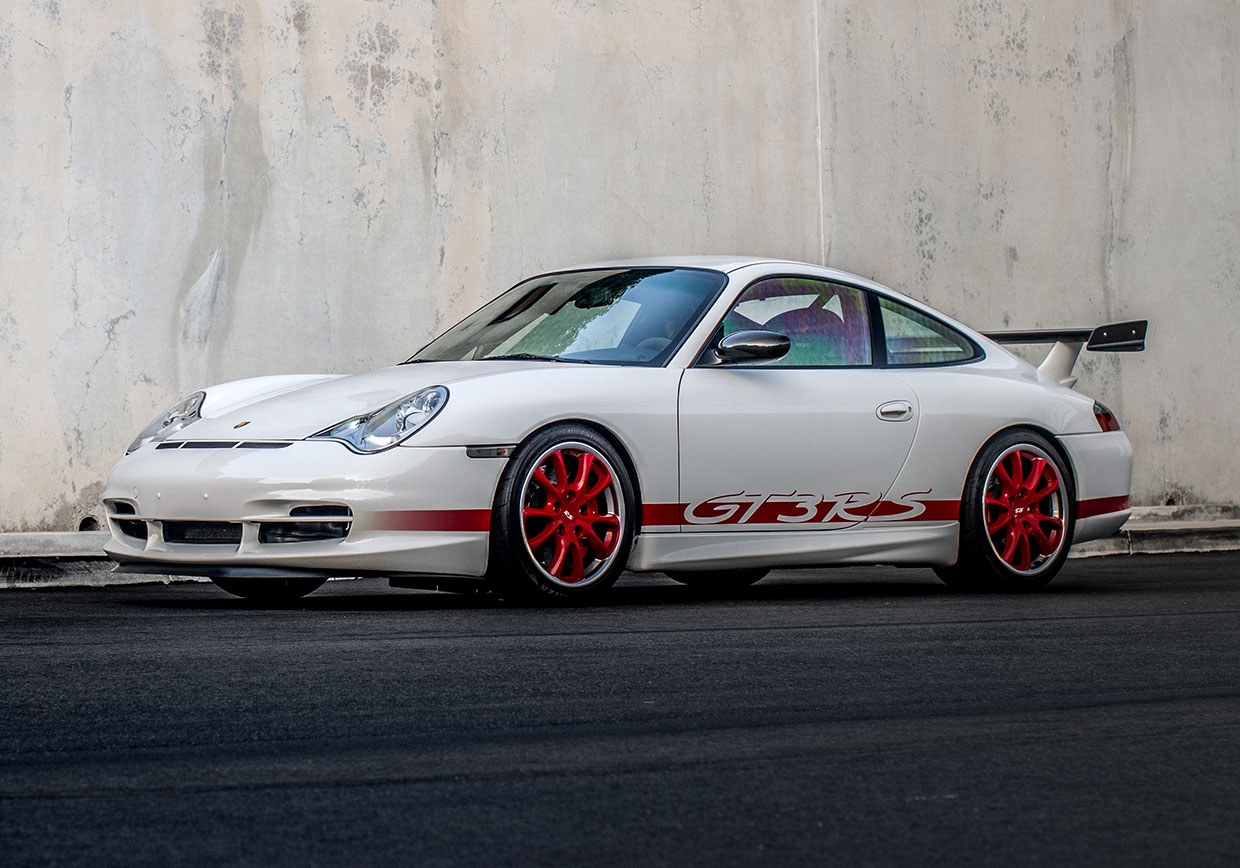 The third Porsche 911 GT3 was presented in 2006 and based on the 997 model. The engine still had the Mezger block with 3.6 litres in capacity, producing 415 hp at 7,600 rpm and 405 Nm (430 Nm in sport mode). 0 to 62 mph took 4,3 seconds, while the top speed was now 192 mph. In the suspension department, there were some changes as well: wider track, 19″ instead of 18″ wheels with 305 section rear tyres, monobloc brake calipers and 350 mm rear rotors. On top, the new Porsche Active Suspension Management (PASM) with electric damper control and different driving modes came as standard. 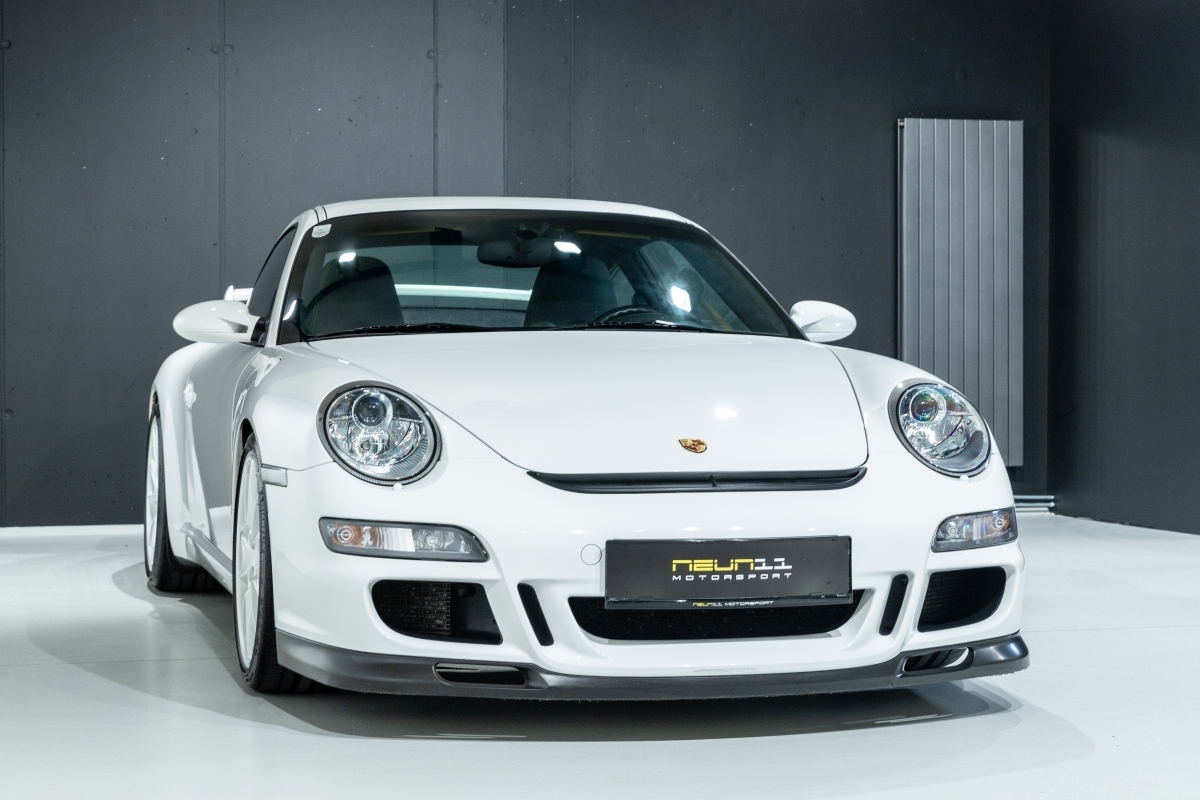 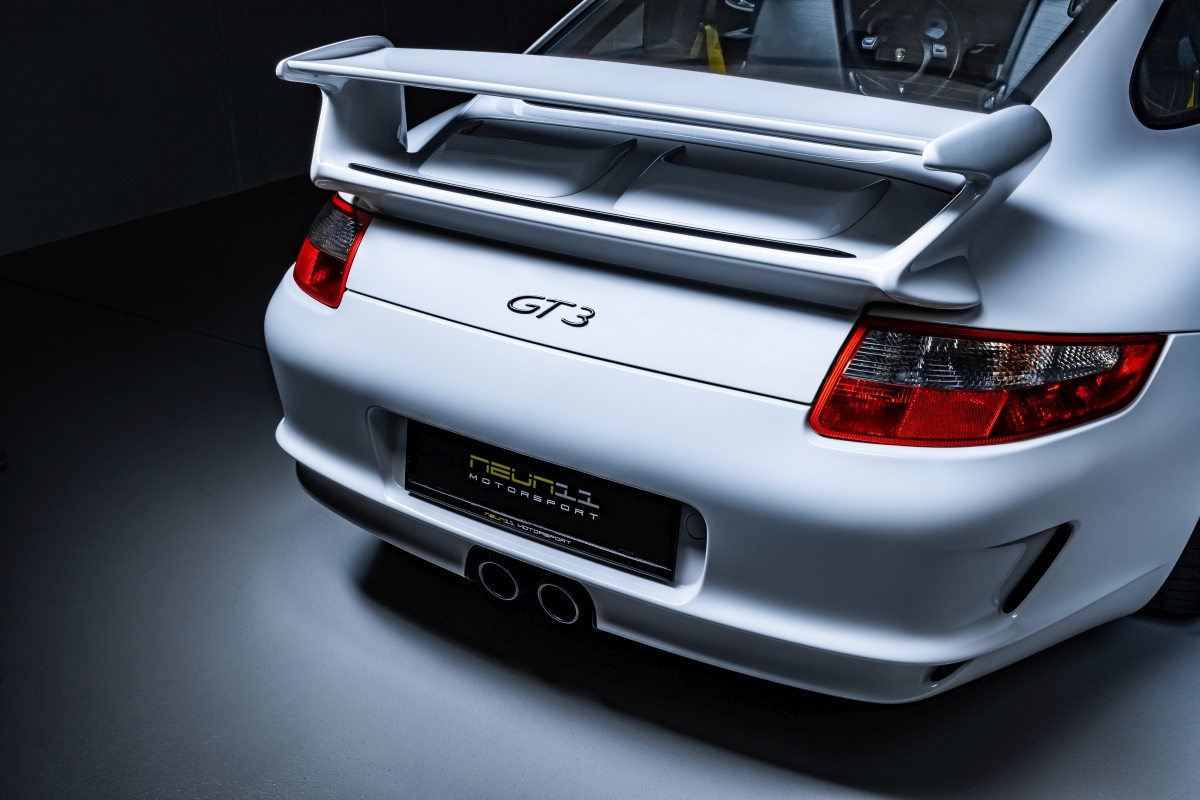 As an option, the GT3 could be fitted with seats from the Carrera GT, which saved more than 20 kilograms compared to the sports seats. Automatic air con came as standard from the 997 GT3 onwards. In contrast to the 996 GT3 RS, the 997 GT3 RS was based on the wider body of the four wheel drive models and was fitted with a plastic rear window and a carbon fibre rear wing.

The last Porsche 911 GT3 with the Mezger block and manifold injection was the 997.2 GT3, whereas the 997.2 Carrera and Turbo were equipped with direct fuel injection engines. With its increased capacity of 3.8 litres, the new 911 GT3 pushed out a strong 435 hp and 430 Nm. At the same time, the rev limit was raised even further to 8,400 rpm. Besides the one-piece rear wing, the new GT3 could easily be recognised due to new centre-lock wheels.

As a first in GT3 history, the Porsche 997 GT3 RS model did not only get upgraded suspension, but more power. The 911 GT3 RS 3.8, offered from 2010 onwards, had an increased power ouput of 450 hp, thanks to a mindboggling compression ratio of 12.6 : 1 among some other changes. Some neat bit of trivia: At the 2010 24 hours of the Nürburgring Nordschleife, a road legal 911 GT3 RS 3.8 managed to achieve a very respectable 13th place. But the Porsche 997 GT3 wasn’t even at its peak with the GT3 RS 3.8. In 2011, Porsche released the limited edition 911 GT3 RS 4.0, which marked the end of production for the normal GT3 and the GT3 RS 3.8. As you can tell by the name, the engine capacity was increased, again. The 4.0 litre lump had an insane compression ratio of 12.9 : 1 and was the first GT3 to crack the mark of 500 hp. It can be identified by the little flaps on the sides of the front bumper and the 4.0 lettering in the endplates of the rear wing. On the Nürburgring, the 4.0 scraped another 6 seconds of the Porsche 911 GT3 RS 3.8’s laptime and with its 7:27 minutes it was even a second quicker than a Carrera GT!

With the Porsche 991 GT3, the Stuttgart brand introduced the first GT3 with an engine, that’s not based on the Mezger block. 3.8 litres in capacity, direct fuel injection and 475 hp were the figures. Peak rpm was now close to bike engines at 9,000 rpm. On the other hand, an outcry went through the Porsche fanbase, as the 991.1 GT3 was only offered with a 7-speed PDK gearbox. 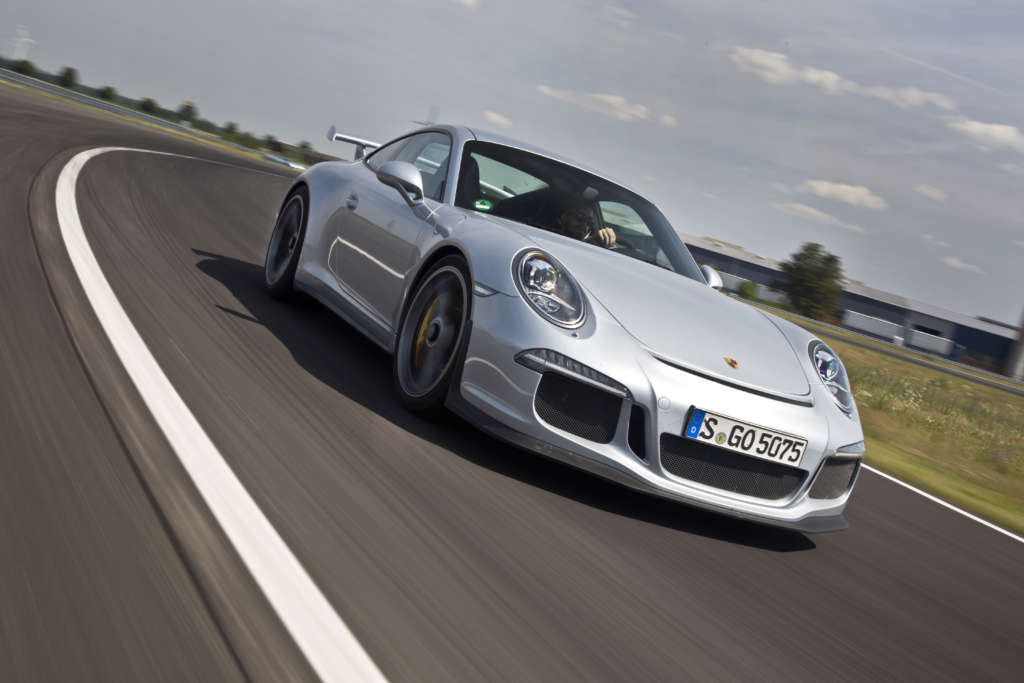 In 2017, the Porsche 911 GT3 got its next refresh. The 500 hp beast of the 991.1 GT3 RS now works in the base GT3 as well. Porsche listened to its customers, now offering a manual gearbox for the GT3 again. After the prices for the 911 R skyrocketed, because it was seen as the last real naturally aspirated Porsche sports car with a manual, a bubble arose. As Porsche doesn’t want its customers to use their cars as an asset, they wanted to stop the prices climbing even further.

Thanks to the 911 R’s success, Porsche offered the so called Touring package for the 991.2 GT3 as a no cost option. In a nutshell, the Porsche 911 GT3 Touring is a 911 GT3 without a wing, providing sleeker, more elegant looks. The Touring is only available as a manual and there is no way to combine a Touring with the Clubsport package. The 2018 911 GT3 RS got another chunk of extra power, now sending 520 hp at 8,250 rpm to the rear wheels. 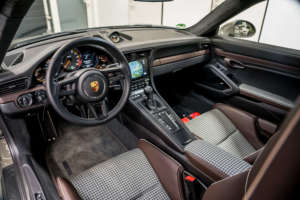 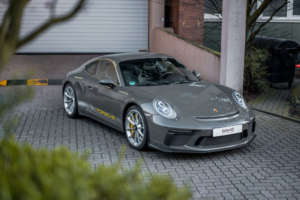 The Porsche 911 GT3 is a real driver’s car in every single generation. It represents Porsche’s principles, especially those of the company’s early days, like no other Porsche. It is a sports car, reduced to the essentials and besides the pursuit of sheer performance never lost sight for maximum efficiency, which is a pretty unique combination.

We want to congratulate the Porsche 911 GT3 to its 20th birthday and very much hope to see many more generations of Porsches finest naturally aspirated sports cars.

Every single Porsche 911 GT3 on Elferspot could be found >> here!