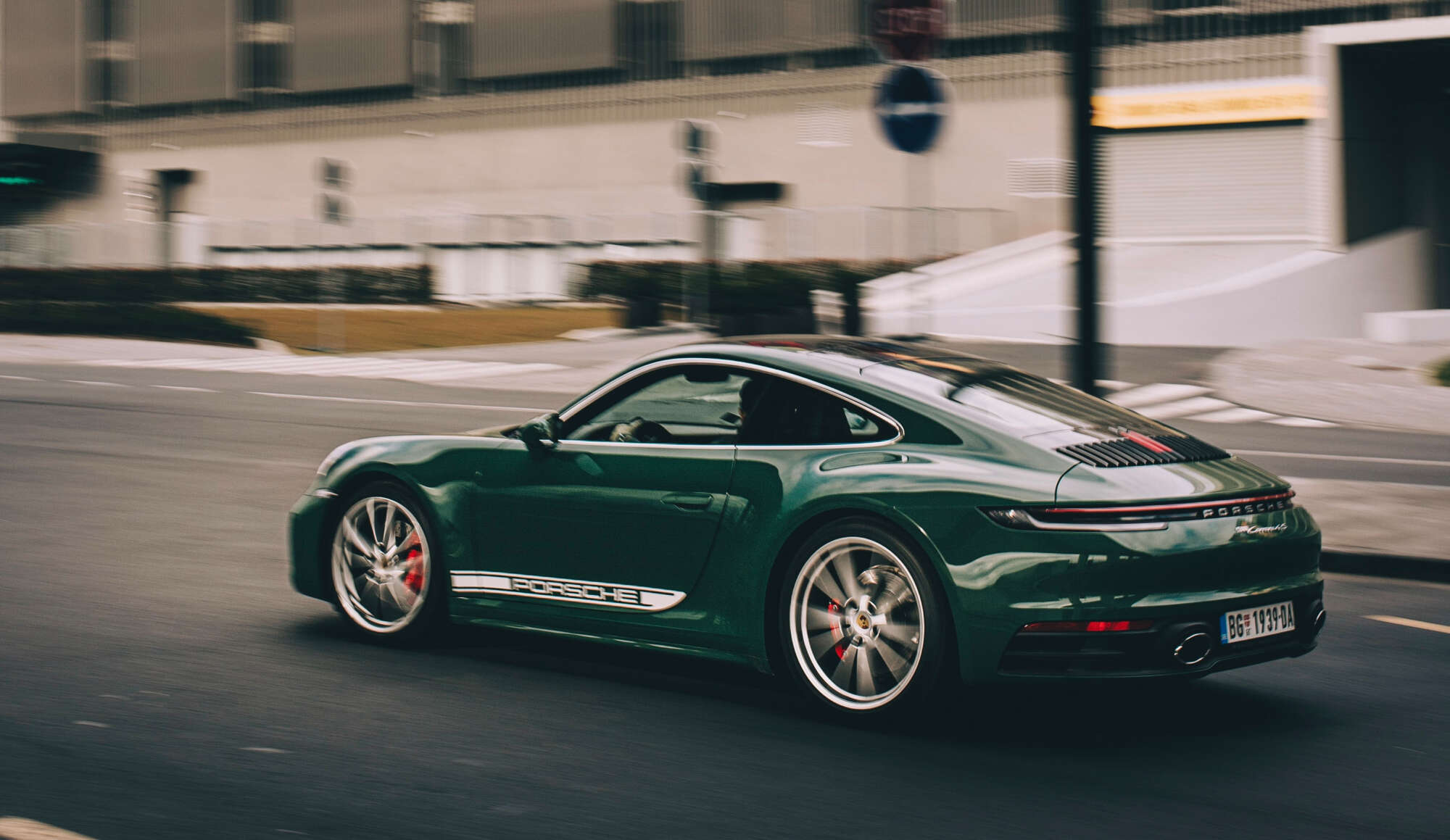 A Porsche 911 992 is a perfect blend of racing pedigree, incredible performance and elegance in probably the most timeless silhouette of any sports car. The Porsche 911 still is true to itself, without becoming too flashy over the years. As we’ve already discovered, a 911 is a car, that doesn’t appeal via its specs or laptimes alone. It’s about the way it delivers the experience. Especially for younger enthusiasts, that’s a bit tricky, because enjoying flat-six thrills isn’t on high schools regular timetables. Our fellow reader Stefan Jovanovic is a perfect example. He wasn’t a Porsche man himself, before the Porsche 991 and 992 converted him into one. In today’s Elferspot magazine episode, Stefan tells us, how he got into Porsche and why he can never go back.

Click here and find all used Porsche 992 on elferspot.com

Stefan, we’re happy to have you here. Would you tell our readers, where it started for you and how you got into cars?

Thanks for having me! You know those first moments of your life, that you can properly remember and still visualise? For me, that was a moment in the early 90’s. I was barely able to say mommy or daddy, but already knew a lot of car brands. I couldn’t even pronounce grandpa back then! When walking around the city, I’ve had a nerve racking routine (for my parents, at least): I pointed my finger at almost every car, then made sure to touch it and say its name.

The person to “blame” for my car passion has to be my dad, I think. He was very passionate about transportation in general, but especially cars. During my childhood, he changed his cars a lot. At the age of seven, he let me have a seat on his lap behind the wheel for the first time. It took the passion to grow until my teens, but then, it really kicked in. When I realized, that cars aren’t just tools to get from A to B, it got really interesting.

But Porsche wasn’t on your radar back then, right?

Interestingly, no. My early 2000’s were literally drenched with motorsport. No matter if cars or bikes, racing was my biggest passion back then. I may have been riding a bike for the school run at that time, but I was already counting the days until I could legally drive a car. In class, I was deep into literature – automotive magazines, to be precise. Attending car meets was a must, just as treating sundays for both, church and watching Grand Prix racing on two or four wheels.

In my mind, I already created the perfect embodiment of a street legal sports car. It should have the engine sound of Michael Schumacher’s Ferrari F2004 formula one car, look like a sharp edged Star Wars spaceship and have a mid-engined, rear wheel drive layout. You’re getting the point, none of that applied to a Porsche 911. Thanks to the high pitched, sharp sound of F1’s V10 era, the concept of a Porsche 911 as the ultimate daily driven sports car went under my radar, to be honest.

In comparison with all the other supercar monsters, the Porsche 911 always seemed a bit ordinary to me. And at the time, I couldn’t really work out why. In hindsight, it wasn’t the car’s fault. It was my younger self, failing to appreciate Porsche’s philosophy.

That very much reminds me of myself. As a kid, I didn’t get the appeal of a 911. Maybe, Porsche really is like grown-up food?

To be honest, I can’t really argue with that. It took me some time, to digest the full story of Porsche, but when I did, there was no way back. It was kinda reversal love for me. The 997.2 was the first Porsche 911 to trigger my inner butterflies, but actually the 991 completely turned me into a Porsche fan. It provoked a very strong, cascading reaction of 911 appreciation inside me, which resulted in even greater passion.

I’m guessing, the impact of realising where the 911 magic comes from, was even stronger due to that. Going backwards through Porsche’s history, you can easily connect the classic air cooled origins with the newest iterations, even nearly 60 years on. You can really identify that timeless artery that persists from the first 901 up until the recent 992. That really left a strong impression. Perhaps strong enough to make the 911 a legend in my eyes, even before having had the chance of driving it.

What were your feelings like then, driving a Porsche 992 for the first time?

As the test drive itself came together very spontaneously, I didn’t really have time to think about it a lot. On that note, thanks a lot to my petrolhead friend and Porsche enthusiast Mr. Z. M. for the opportunity! I’ve been given the chance to do something, they say you should never do – meeting my hero! And oh boy, was it a hero. No second-hand, neglected dealer car. This was a properly new, eighth gen Porsche 911.

Approaching the car in the morning light created a very specific landsacpe view of the almost black subject in the enlightened background. My first impression was, that this kind of scenography naturally reveals the real beauty of a 911. I thought to myself, that it is nothing short of amazing to see a new car’s profile, that has barely changed since 1963. Ferry Porsche’s initial design, based on concepts of his father Ferdinand, is one of the most recognisable silhouettes on the planet! Almost six decades into its life, even in its eighth generation, the 911’s resemblance to its origins is unmistakebly visible.

Could you point a stand out design feature of the Porsche 992?

The exterior of the Porsche 992 represents a true embodiment of the ‘less is more’ phenomenon in automotive design. Porsche more or less defined the meaning of simplicity. The whole car is a jewel and gestures itself without having to put in any extra effort. Truth be told, after the silky smooth and elegant looking 997 and 991, the new 992 has a couple more aggressive design elements. But their sole purpose is delivering a bit more presence, which is expected of a modern sports car. However, it does it, without affecting the timeless classiness.

Getting closer to the car puts your soul into a harmonic resonance. The lines are like a perfect musical composition, flowing into each other without any interruption, covered in one of the most interesting paint schemes available from a car configurator – the sophisticated and elegant Aventurine Green.

Take the front hood crease for example. This design feature hasn’t been used since the 993! And this 70’s 911 design feature fits the 992 perfectly well in my opinion. Secondly, now all 911s are wide body 911s. As its wheelbase hasn’t been changed, but the car itself got a bit longer and wider, it definitely has more stance and presence. These changes may have made the car mor aggressive, but somehow, Porsche managed to maintain the eleganct appearance, we used to feel whenever a Carrera flies down the road.

As every new gen of the 911 has its own controversies: Is there anything you dislike?

I may not be the biggest fan of the new door handles, but other than that, I really love the styling. Especially on the inside, it blows my mind how Porsche still manages to update their dash, without totally redesigning it. Preserving the history of a car on the inside in an era of technological obsession is a whole form of art in itself. The perfectly sized and shaped steering wheel, the incredibly well shaped seats and the positioning of alle the components thrill me everytime I get inside it. You’re feeling like sitting in a modern version of a classic design with top notch materials and build quality. In short: It’s a fabulous piece of design to me.

Did it match your expectations driving-wise as well?

Starting the car – with the key on the left, of course – may not be as throaty as some of the naturally aspirated iterations, but you won’t mistake the flat-six from anything else. Gliding around the city in the early morning ,akes you feel like Steve McQueen in the opening scene of Le Mans. Strangely, this rather flashy Aventurine green mixed perfectly with the cobbled streets in the old town of Belgrade. And for a 450 hp sports car, it’s staggeringly civilised and easy to live with. The driving experience in town was surprisingly normal.

Getting out of town however, is like unleashing the beast. With the car properly breathing, 0-100 kph is dealt with in 3.4 seconds. It is simply on the edge of being too fast for public roads, if we’re honest here. But a Porsche 911 isn’t just about sheer numbers. Those are completely irrelevant for the experience. The 992 is so compliant, providing pure magnificence of driving on empty roads. Especially when travelling at lower speeds.

Why? For me, that’s due to three things. First: This chassis layout has been tweaked for almost 60 years now and sets the standard for sports cars today. Second: The engine, or to be more precise its mapping is fantastic. With its rev-happy nature it doesn’t feel like being overly torquey. The power delivery is smooth and rewards you for revving it up to the redline. Third: Even if you’re a manual nerd like myself, there is something strangely intoxicating with the PDK gearbox. It works almost telepathic and shifts nearly without any interruption.

What’s your verdict then? Did the Porsche 992 fulfil your expectations?

As I am a pharmacist, let me quote Paracelsus on this one. He expressed the classic toxicology maxim as follows: “All things are poison and nothing is without poison; the dosage alone makes it so a thing is not a poison”. The dosage of such things as racing aggression, gentlemen’s elegance and familiy practicality has reached an almost golden ratio here. Combined in that timeless shape, it is the perfect recipe for a sports car.

Click here and find all used Porsche 992 on elferspot.com