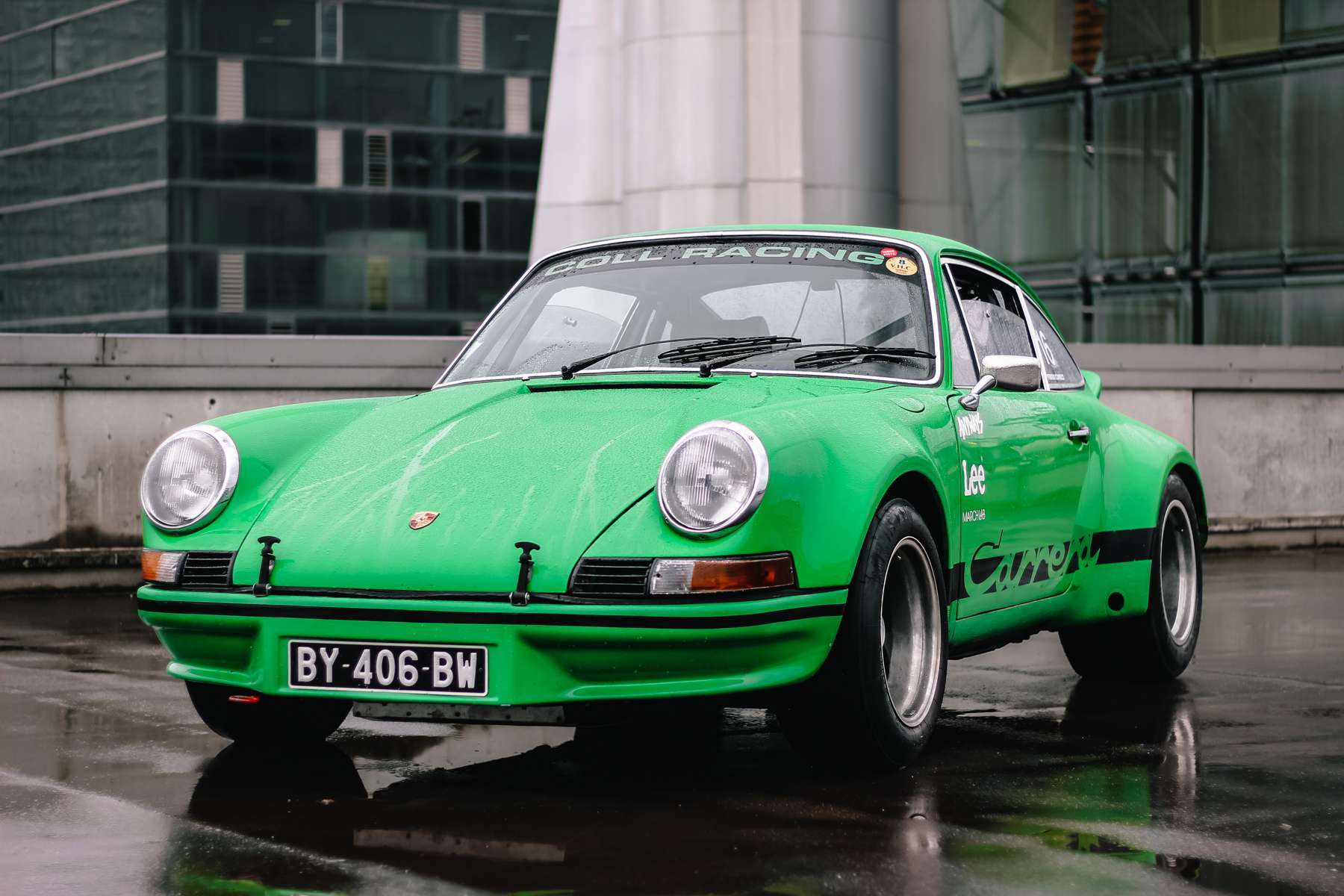 During the cars & coffee event ”The Roof“, organized by Olivier, I had the opportunity to shoot his 911 RSR on an outstanding rooftop in the suburbs of Paris. The perfect grey day contributed to creating a unique atmosphere, matching perfectly with the 911.

One of the best details of this car for me and for many Porsche enthusiast is the ducktail spoiler, making it distinguishable from any other 911, as well as the race track history behind it back in the ’70s. This car is one of my favorites of his collection.

I asked Olivier some questions about the entire story behind this stunning example of the legendary 911 RSR – hope you enjoy! Yes, it’s a 911 RSR EVO from 1973 based on a 911 2.4 TE with mechanical injection. The colour Viper green suits her so well! Immediately it reminds me of the beautiful ’70s hippie period, I like this nostalgia.

What condition was the car in when you bought it? Do you know about your Porsche’s history and previous owners?

I bought this car from a gentlemen racing driver. The guy was very nice and could not keep the car for family reasons. He sold it to me with regret. I know, he was really in love with this car and I understand him; It’s such a pleasure to drive it. I remember that his wife had prepared a cake to console him. He was on the verge of tears when I left Perpignan with the 911.

How did you come across the 911 and what’s your favourite detail or what do you love most about your RSR?

I always dreamt of owning a racing 911 with all the superlatives and an engine that roars with a sound completely bewitching. Beyond the mechanics, the line is spectacular. With her big wings wide, the mythic ducktail and a sublime ass. She had all the attributes that I dreamed of a price oddly more affordable than a 911T classic. I think it was due to the fact that five or ten years ago, no one was looking for racing models.

The work that was done on the car was more expensive than the price I bought it! 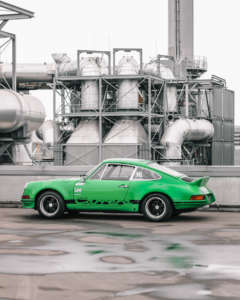 Did you restore it or was the RSR already restored when you got it?

The former owner had done three races, taking good care of the car. Two or three years before, the car had been fully restored and prepared state of the art, It’s really very close to a real 2.8 RSR factory, every detail has been carefully treated. The 911 has received a lot of vintage factory parts. Its engine delivers 230 horses today. It’s a 2.4 S engine block modified in 2.7 RS with a lot of work on details. The 915 gearbox has also been modified in a short way, It has big four-piston brakes and larger discs with a hydraulic handbrake.

The 911 is equipped with a bow, vintage bucket seats, spaghetti exhaust, and a sporty muffler made of very fine steel. The door panels are those of a 2.7 vintage weight lift, it has an 80L plastic fuel tank from the 2.7 RS. The windows are made of Makrolon and it has specific pedals.

The engine hood, rear bonnet and the doors are made of fiber. Overall the 911 weighs just over 900 kg. The power-to-weight ratio is just phenomenal! 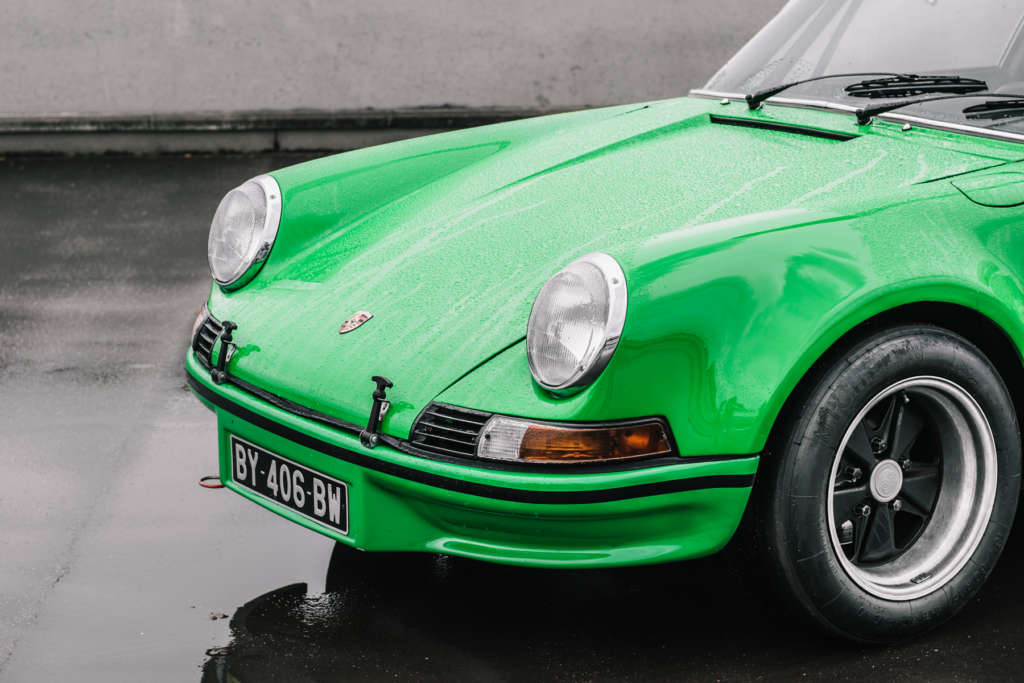 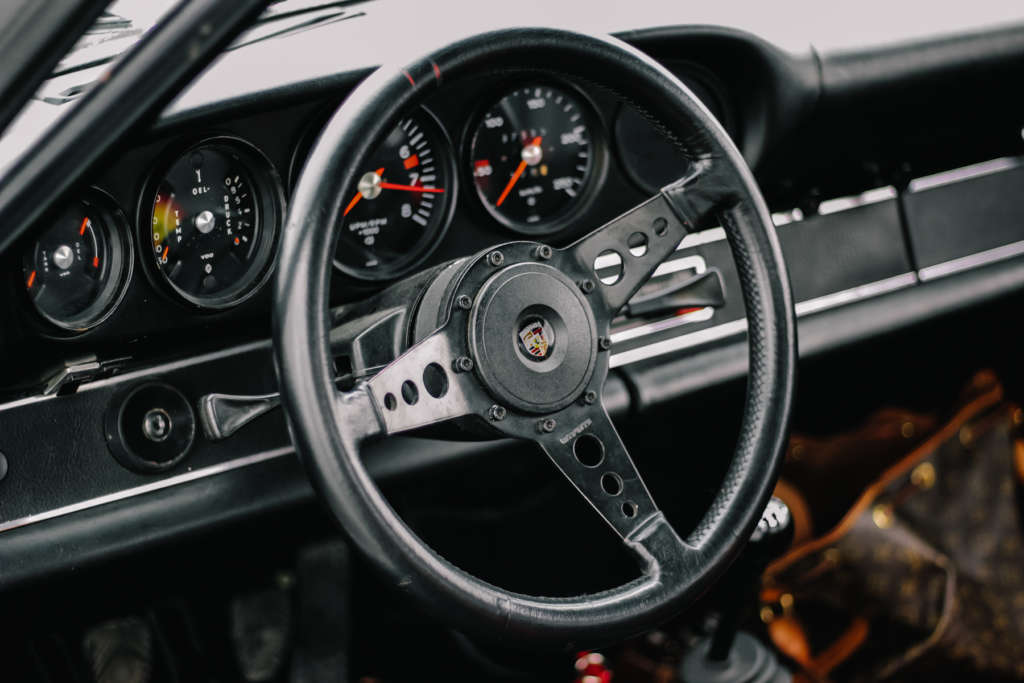 What about the sticker “Coll Racing” on the front window?

Jean Michel Coll is the restorer of this 911, he had done it all before. I’m therefore the third hand since its restoration and preparation. He is a renowned “préparateur” who has worked on many Porsches. He is based in Perpignan and the team is called Coll Racing.

Personally, I wanted to keep all racing details on the beast. The banner disappeared because I put a cover on the car for a “marketing” operation with my brand ANYWAYS and the brand Franco-Japanese Maison Kitsuné.

What about the “Period Correct” sticker and your jacket – are you a big fan of the brand?

”Period Correct“ is the streetwear brand of my friend Bryan. His workshop is located in Costa Mesa, near Los Angeles in California. It’s a brand that inspires me, I like the codes it represents and the universe around it. The artistic approach of Bryan is authentic and it’s felt through his collection.

What about number 16? Does it mean something special to you?

Number 16 was simply the number of my last regularity rally, I left it by negligence. I also removed it to make room for the cover and the number 75, which is the postcode for Paris. 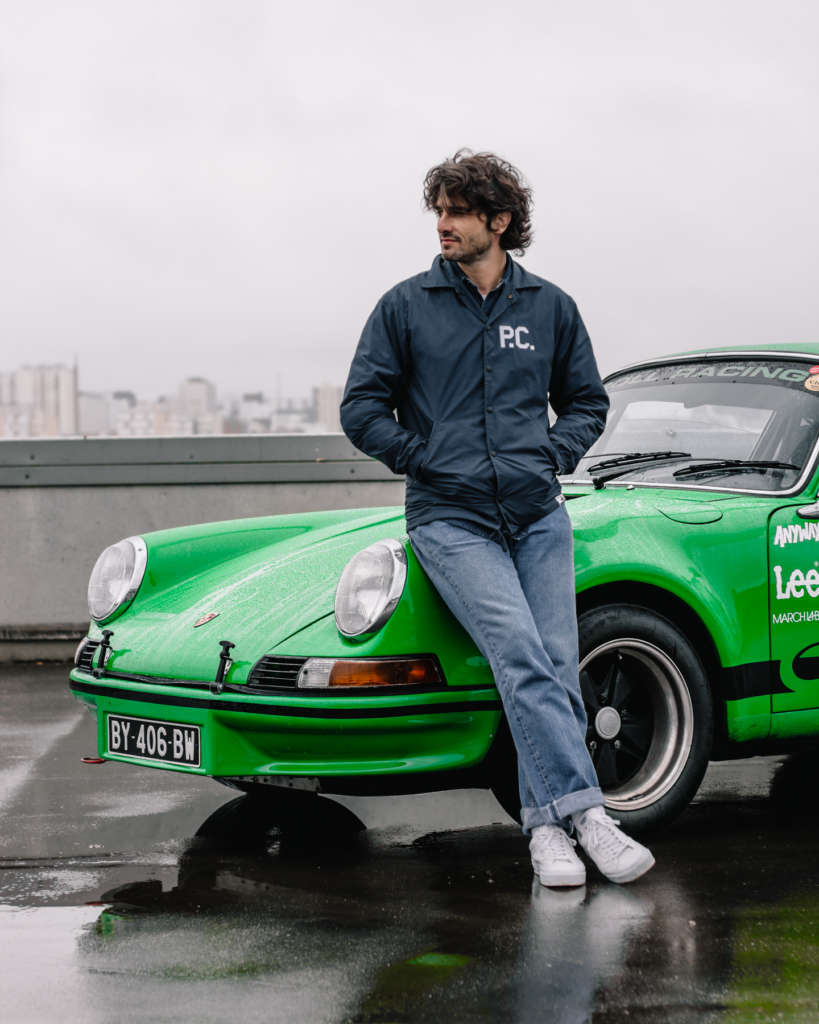 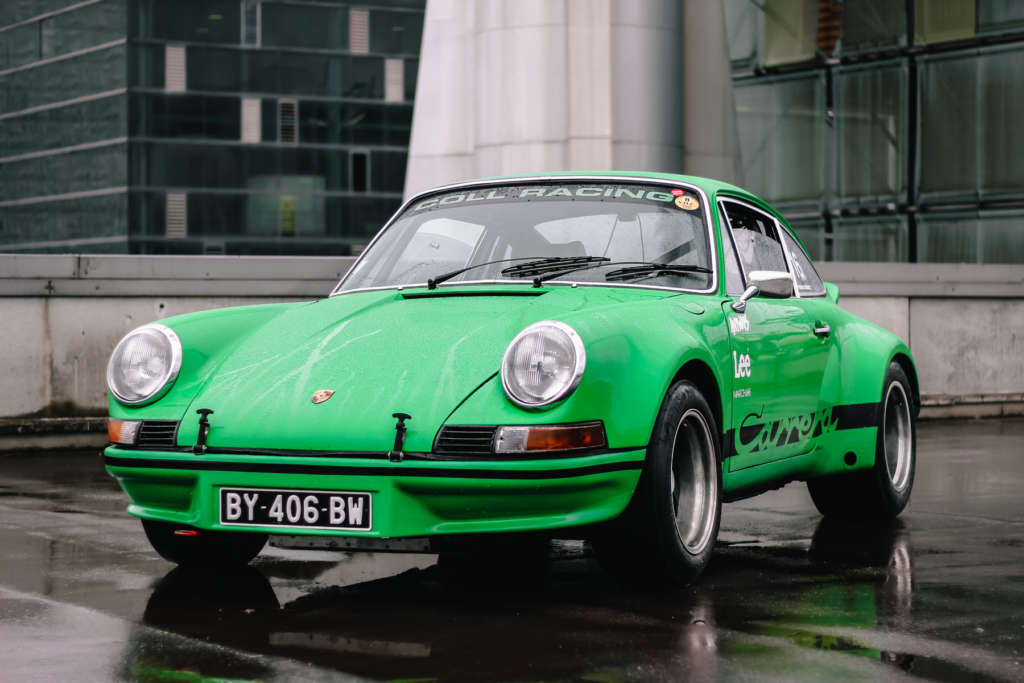 I really like the race track so much! But unfortunately, my financial means do not allow me to race as much as I would like to. I do about four to five race track trips per year, plus two or three regularity rallies. What amuses me, is the sensations, the pleasure and the constant learning of how to drive better – not the fact of arriving first at a stage. I’m more in the game itself rather than what I win.

It must be heard screaming in the right line of the stands of the circuit of Le Mans to get goosebumps! There is no more modern car player like it today. Only vintage racing cars can provide such sensations.

This 911 was built with the same details of the 2.8 RSR factory, with the same adjustments, in order to have maximum performance.

The Porsche Carrera RSR will write big pages in the history of motorsport. It‘s also one of the most important sports cars in the construction of Porsche’s image, based on reliability and performance. All that could be won during their period was won on the Carrera RS and RSR in their respective categories. In 1973, it was really Porsche to beat.

Tell me about your experience at the Rally Ol’Drive with your 911.

The Orléans Ré Rally is a family rally, we leave with friends from Paris to Orléans with the ambition to have fun above all!

We are lucky that the roads are so beautiful in France. The arrival on the island of Ré in autumn with the grazing lights of the season is just sublime! My friend photographer Vincent Perraud is always making beautiful cliché photos during the trip, I feel very inspired by him. 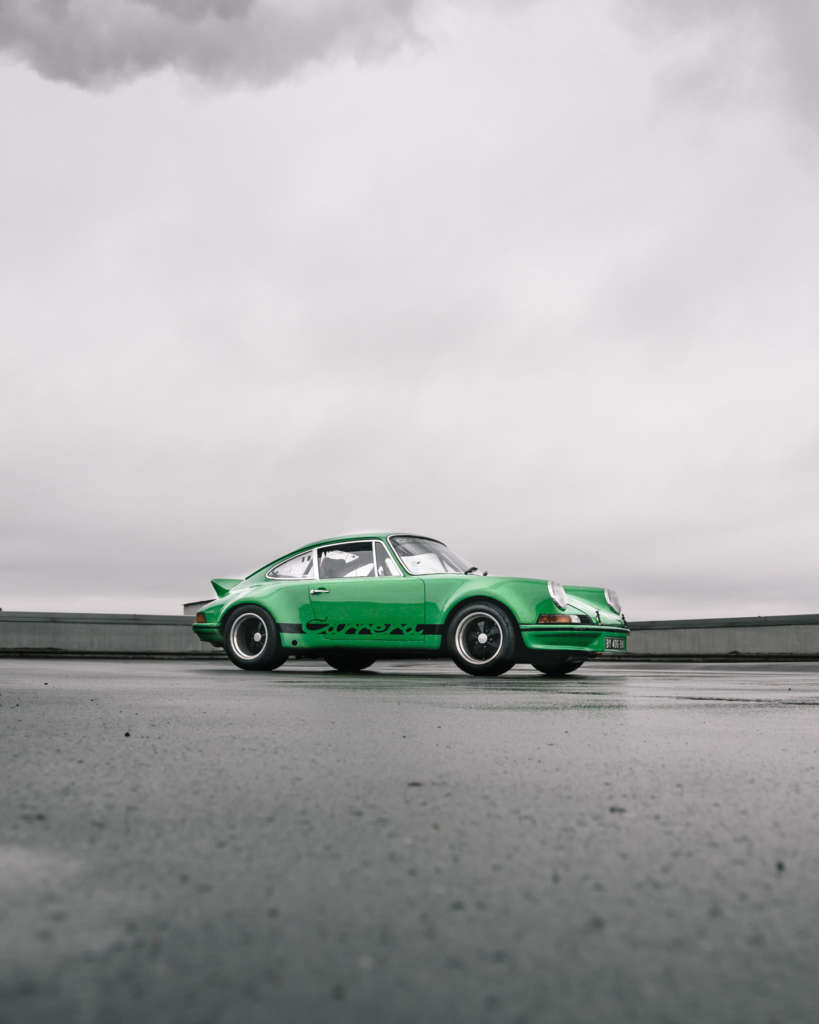 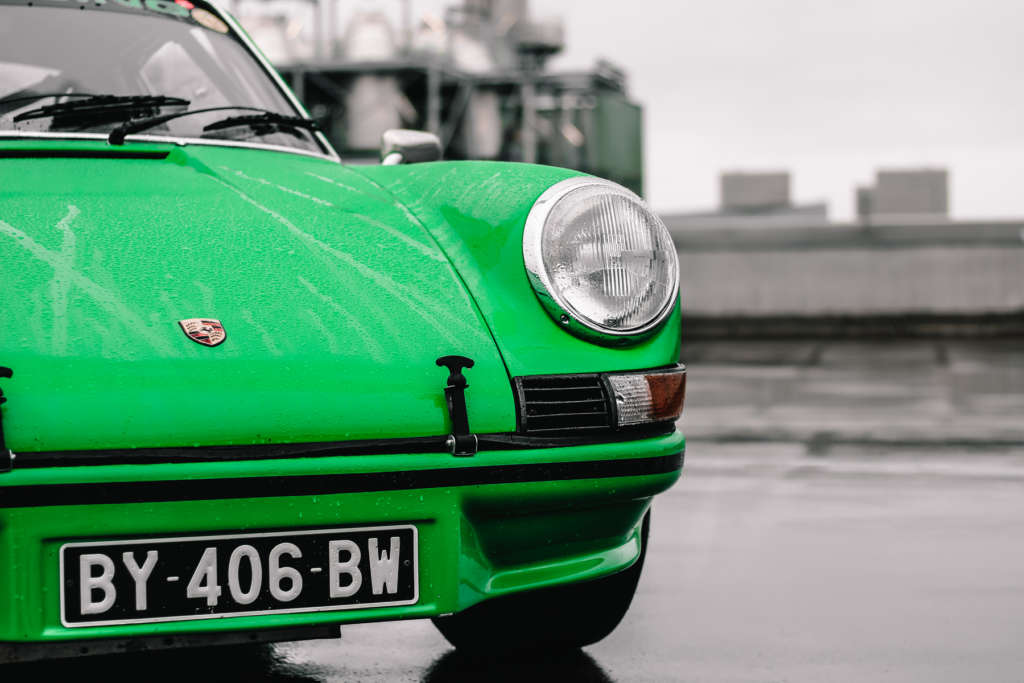 Tell me about this little character…

Rocky the Chihuahua was almost born in this car. He joins in on each of the road trips. He has a lot of sleep because he likes to sleep with the loud sound of the engine. Without any thermal and phonic insulation, this 911 is not the ideal place for a dog, but it’s really his favorite car. He can instantly locate it within 100 meters.

He has a lot of sleep because he likes to sleep with the loud sound of the engine. Do you think you’ll keep this car forever?

I can’t swear anything, but it is the car most pleasurable to drive. She is playful, reliable and she has a crazy face, it gives me such a sensation. Also, I have so many wonderful memories and race stories. My girlfriend and I also went through so many adventures during our trips in the 911. For sure this would be the last one of my collection to sell. Oddly, the one that cost me the least. 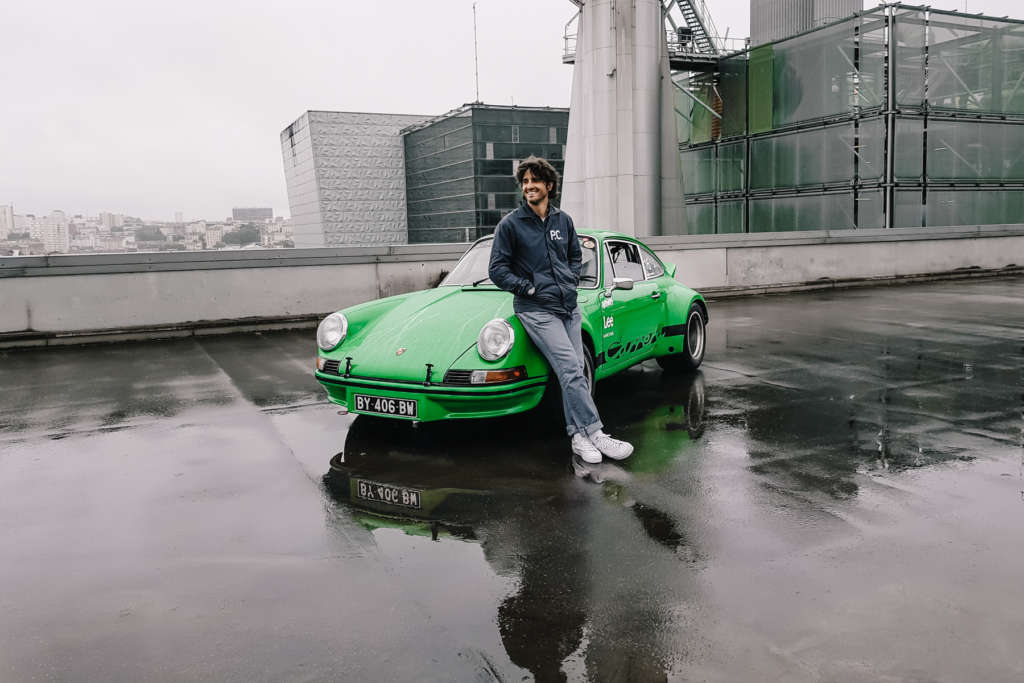 The article was created in cooperation with Carphiles