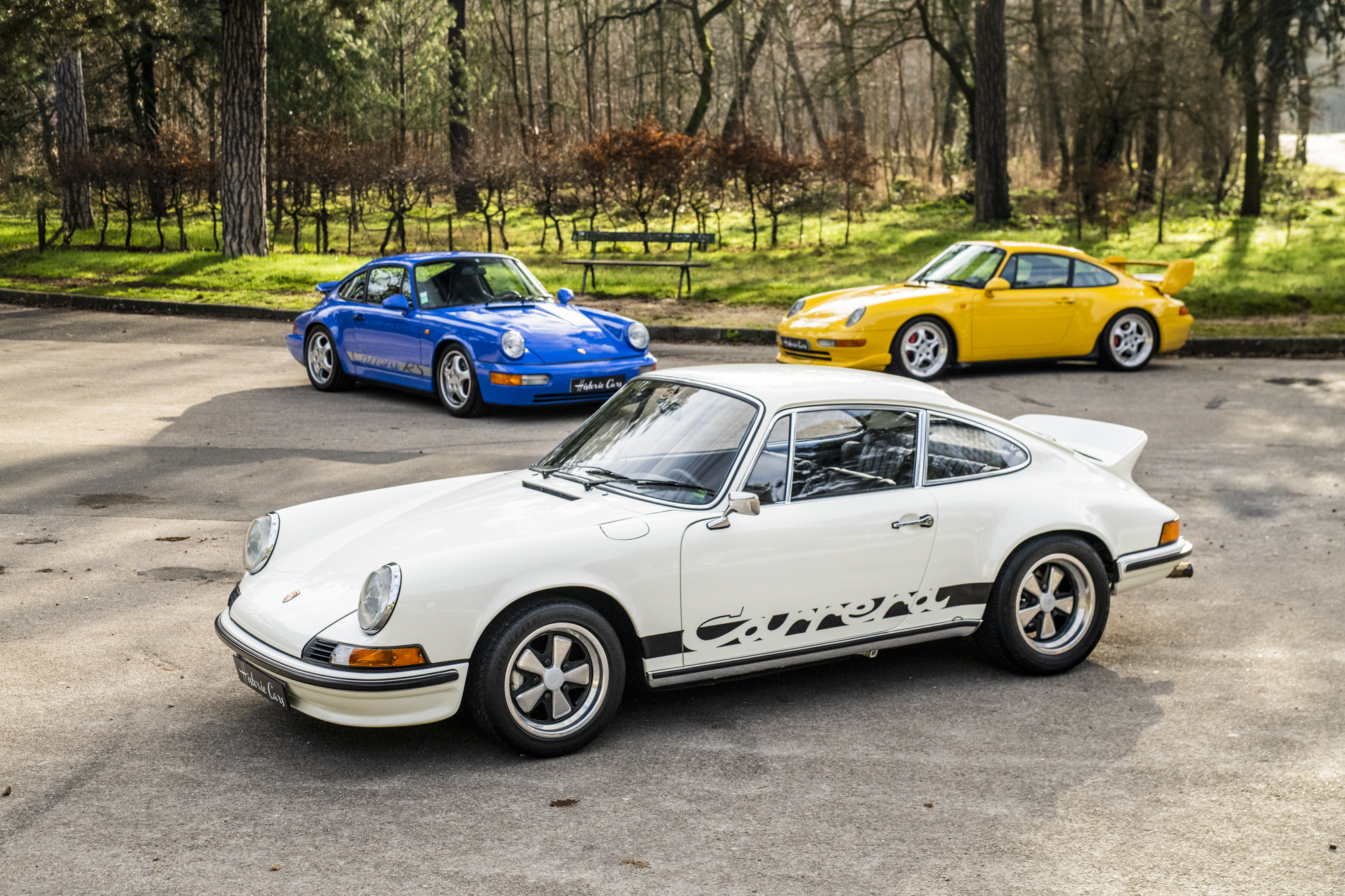 You don’t see something like this every day: three Porsche 911 Carrera RS, i.e. with the racing suffix, in one fell swoop. An F-model 911 Carrera RS 2.7, a 964 Carrera RS 3.6 and a 993 Carrera RS 3.8. Our partners at Historic Cars have tracked down and united the exclusive trio. They were part of a collection and shall now find a new home. Of course we do not want to withhold this from you!

With its ducktail, the Porsche 911 Carrera 2.7 RS shaped a generation!

It is clearly more present than its F-model 911 siblings. The 2.7 RS has long been a legend. As the absolute spearhead, as the crowning glory of the first generation Porsche 911, it was built to homologate this model with 210 hp for racing. It is recognizable by flared wheel arches, the front oil cooler and of course THAT rear spoiler. This quickly found the nickname ducktail. It reduces the lift of the rear of the vehicle by a whopping 75% and makes the RS a lot more stable.

And that was sorely needed. The prescribed diet of thin glass, fixed rear side windows, no sound insulation, door armrests, passenger sun visor, carpet, rear seats and much more pushed the weight of the Carrera 2.7 RS Sport (equipment code M471) below 1,000 kg. The Porsche crest was a sticker back then, just as it is on todays Rennsport 911s. A total of 1,580 models were built by the end of production in 1973, plus 10 prototypes. Most of them, over 1,300, were ordered as RS Touring (equipment code M472). This meant slightly more equipment and a kerb weight of 1,075 kilograms.

The 911/83 powerplant was based on the 2.4-liter unit familiar from the Porsche 911 S. In terms of sound, it can hardly be topped. Its nature is rev-happy, lively and it has a wonderfully mechanic tone to its voice.

Our photo model also received the 911 S equipment in the Touring version. With over 100,000 kilometers, this Porsche 911 Carrera RS 2.7 has given its previous owners a few hours of pleasure. That’s for sure! But you can’t tell from its total of eleven entries in the Historic Rally Monte Carlo. This very tasteful and “discreet” Carrera RS has already been fully restored. It impresses with its immaculate interior, wonderful paintwork and well-documented history.

Porsche did without a Carrera RS during the construction period of the Porsche 911 G-model. So it was 18 years before another RS saw the light of day. The Porsche 964 Carrera RS was launched in 1991. It was derived from the fastest one-make cup in the world, the Porsche Carrera Cup, which was launched in 1990. Visually, the Porsche 964 Carrera RS occupies an absolutely special position. It is the only Rennsport-badged Carrera ever built without a fixed rear spoiler or wing. However, like its ancestor, it proudly presents the special lettering on the side of the vehicle.

In other respects, too, the Carrera RS anno 1991 impresses with its simplicity and, above all, low weight. At 1,220 kg, it doesn’t come close to the featherweight of the 2.7, but compared to the Carrera it has lost a full 150 kg. The 260 hp from the 3.6 liter engine have little trouble, accelerating the 964 from 0-62 mph within 5.3 seconds. With 76,000 kilometers in over 30 years, the Porsche 964 Carrera RS shown here is more of a sheltered specimen and shines like new. You can tell by looking at this RS, that it has mostly found shelter in heated garages.

The interior of the maritimeblue homologation 911 invites you to take to the roads with its color-coordinated Recaro bucket seats, door straps and even a matching blue fire extinguisher. Like the 2.7, the 964 comes with a 5-speed manual transmission. Other than ABS, there are no driver aids. As one of 2,282 units, this ’91 911 Carrera RS marks the end of the classic 911 form. The Porsche 993 went its own way in design from 1993 onwards. But it’s hard to believe that these cars already have 30 years under their belt. We are sure, such a car would find its customers even today!

The 993, was the last Porsche to wear the Carrera RS name

In the third – and last – air-cooled Carrera RS edition, Porsche again went all out visually. In addition to 300 horses, the 993 Carrera RS received properly unique aerodynamic trickery again. The regular RS received a spoiler similar to that of the Turbo. The large, fixed rear wing was reserved for the Carrera RS Clubsport (equipment code M471). It not only generated downforce, but also supplied fresh air to the now 3.8-liter six-cylinder boxer engine. In general, it comes across as considerably more muscular than its predecessors. The body is much wider, the rims are multi-piece, and even the front bumper of the Clubsport models has actual aero blades on its sides. After it, the nomenclature for Porsche’s naturally aspirated top models was to change. From the 996 onwards, they were called Porsche 911 GT3. But the name RS was still used for the particularly hot GT3s.

Speed yellow on the outside, black with likewise speed yellow accents on the inside – that is the formula for the impressive appearance of this collector’s item. In its design, it is clearly closer to the 993 GT2 than to the 993 Carrera. This somewhat anticipates the later development of the water-cooled RS models. This time, Porsche has slimmed down a whopping 130 kilograms compared to the base model. The Porsche 993 Carrera RS shown here comes from a Japanese first owner and impresses with just 36,000 kilometers of mileage. With only 1,014 units built, an example in such good condition is of course gold dust!

Technologically, the last air-cooled Porsche 911 Carrera RS was a real leap forward. For example, for the first time there were now six gears to shift through instead of five. Although it took over the door panels from its predecessor, it was quite a bit ahead of it in terms of lateral dynamics. The aluminum rear axle not only saved weight, but above all provided greater agility. Nevertheless, the RS remained true to itself in that its basic set-up clearly focused on exploiting traction. But anyone wanting to be fast in a Porsche 911 Carrera RS has always had to have a lot of driving skills.

You don’t often see such a trio infernale…

There were not even 5,000 of these vehicles produced altogether. To have three of them in a collection is an extraordinary privilege. Bringing these three Porsche legends together for a photo shoot and to give petrolheads like us wet dreams with them is something else in itself. At this point, we would like to thank our esteemed partners at Historic Cars for making this possible. By the way, the cars are also for sale – first at Elferspot, of course. So if you want to keep this trio together, you should be quick!

Share "The Porsche 911 Carrera RS trio" with your friends!