A Porsche 911 on the world’s highest active volcano 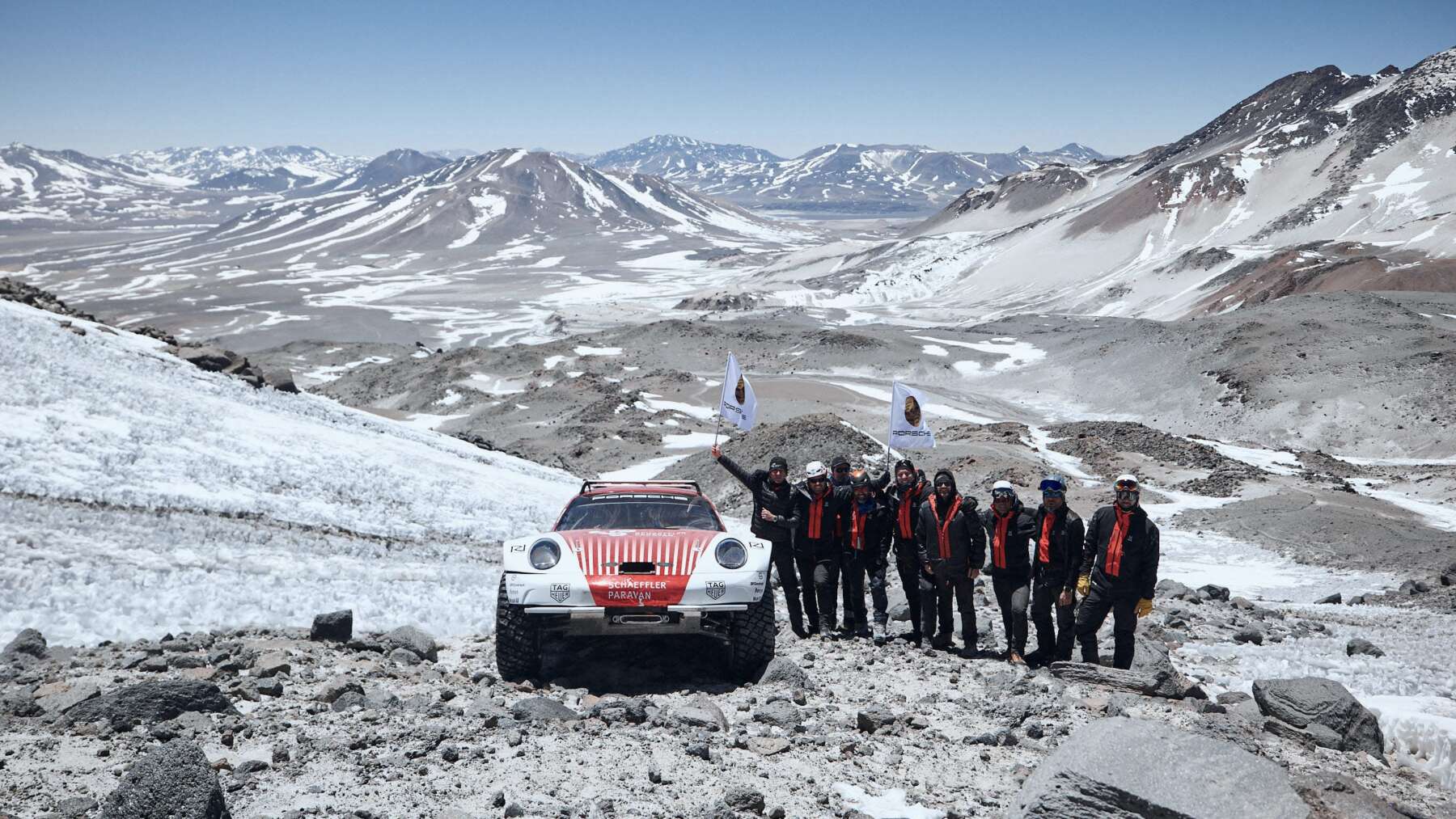 Only those who challenge themselves again and again will improve. Hardly any manufacturer takes this to the extremes, as Porsche does. Their latest challenge was driving up the world’s highest active volcano. And what kind of car was used? A Porsche 911, of course. The RD Limited team, led by three-time Le Mans winner Romain Dumas, drove a 911-prototype to an incredible 6,007 meters in altitude.

For the first test, the team chose the Ojos del Salado in Chile

Porsche has always presented itself and its cars with extreme challenges. Over the past six decades, their sports cars have been put to the test on every conceivable occasion. Whether at the Dakar Rally, the Safari, the 24 Hours of Le Mans and the Nordschleife, or during trials in the Arctic Circle. But this time it wasn’t the stopwatch that was the opponent, but the terrain itself.

Because Dumas led his team on the road to the Chilean Andes on the last weekend in October 2022. There they subjected two specially built Porsche 911s to an extreme test. In the Atacama Desert, they were to climb the world’s highest active volcano, the Ojos del Salado. Hardly any other place in the world puts man and material to such a test. Temperatures as low as -30°C and extremely thin air mean that not even plants grow there.

At the very first test, the squad set an altitude record for Porsche

Originally planned as a test, the expedition soon turned out to be a record drive. With Romain Dumas at the wheel, one of the two Porsche 911s crossed the magic 6,000-meter mark. It was only at 6,007 meters that impassable ice walls denied further progress. No Porsche has ever gone higher on its own.

“That was an unforgettable and special moment in this place that is as breathtakingly beautiful as it is unforgiving. Higher than us today were probably only the airplanes. From the first meter, the 911 felt robust and agile. We didn’t spare ourselves and demanded everything from the car.”

Michael Roesler, chief-engineer Porsche 911, was entrusted with this special project by none other than Dr. Frank-Steffen Walliser, Vice-President, Complete Vehicle Architecture and Characteristics at Porsche AG. The development direction was clear: Design a Porsche 911 that can withstand almost all conceivable adversities and heights.

Roesler’s engineering team received support from the RD Limited squad. Two Porsche 992 Carrera 4S cars served as the base vehicles. The chassis of the current 911 is light enough on the one hand and robust enough on the other to withstand extreme heights. To protect the drivers, the engineers fitted a roll cage and bucket seats with special seat belts.

The creative tinkerers also installed portal axles to allow up to 350 millimeters of ground clearance. To compensate for the huge, 310 millimeter wide offroad wheels, the team significantly shortened the gear ratio of the seven-speed manual gearbox. The 450-hp 3.0-liter six-cylinder boxer engine, on the other hand, remained unchanged.

The only area where the team had a hand was the cooling system. To protect them from damage, Roesler’s team moved the radiators from the front of the vehicle to the upper rear. Another concession to its off-road capabilities: the entire underbody is protected by aramid fiber cladding.

Anyone who thinks these 911s are tractors in 911 guise is very much mistaken. Some of the technology is extremely sophisticated and can even be traced back to racing. Porsche’s Warp Connector is one of the highlights. Even when the axles are extremely interlocked, this ensures a connection between all wheels. This keeps the axle loads as constant as possible, even under extreme conditions.

A steer-by-wire system is also on board. There is no longer a mechanical link from steering wheel to wheels in these vehicles. The body also received extensive modifications to accommodate the large offroad-rims and tires, differential locks and a winch in the front end.

Further adventures for the 911 prototypes have already been announced

“It was something very special to design a 911 like the world has never seen before. A small team of enthusiastic engineers made it possible. The 911 has already proven itself successfully on the race track and, of course, on the road. And now also under extreme off-road conditions,” said Roesler.

Romain Dumas went one step further. In typical racing driver fashion, he looked straight ahead. He hopes that the team can look forward to more such adventures in the future. Frank-Steffen Walliser blows the same horn: “Projects like this are what set Porsche apart. The team reached for the stars in Chile, and this first adventure will hopefully be followed by others,” he says.

Fancy exploring the Andes in a Porsche 911 yourself? Book the Elferspot Experience now!

If you now want to cross the Andes in South America in a Porsche 911, we have just the thing for you. Together with Jan Kalmar Beyond Adventures we have exclusive tours in South America and Patagonia on offer for you! Granted, you won’t cross the Ojos del Salado there, but you’ll never get closer to the adventures of the team around Romain Dumas.

Share "A Porsche 911 on the world’s highest active volcano" with your friends!