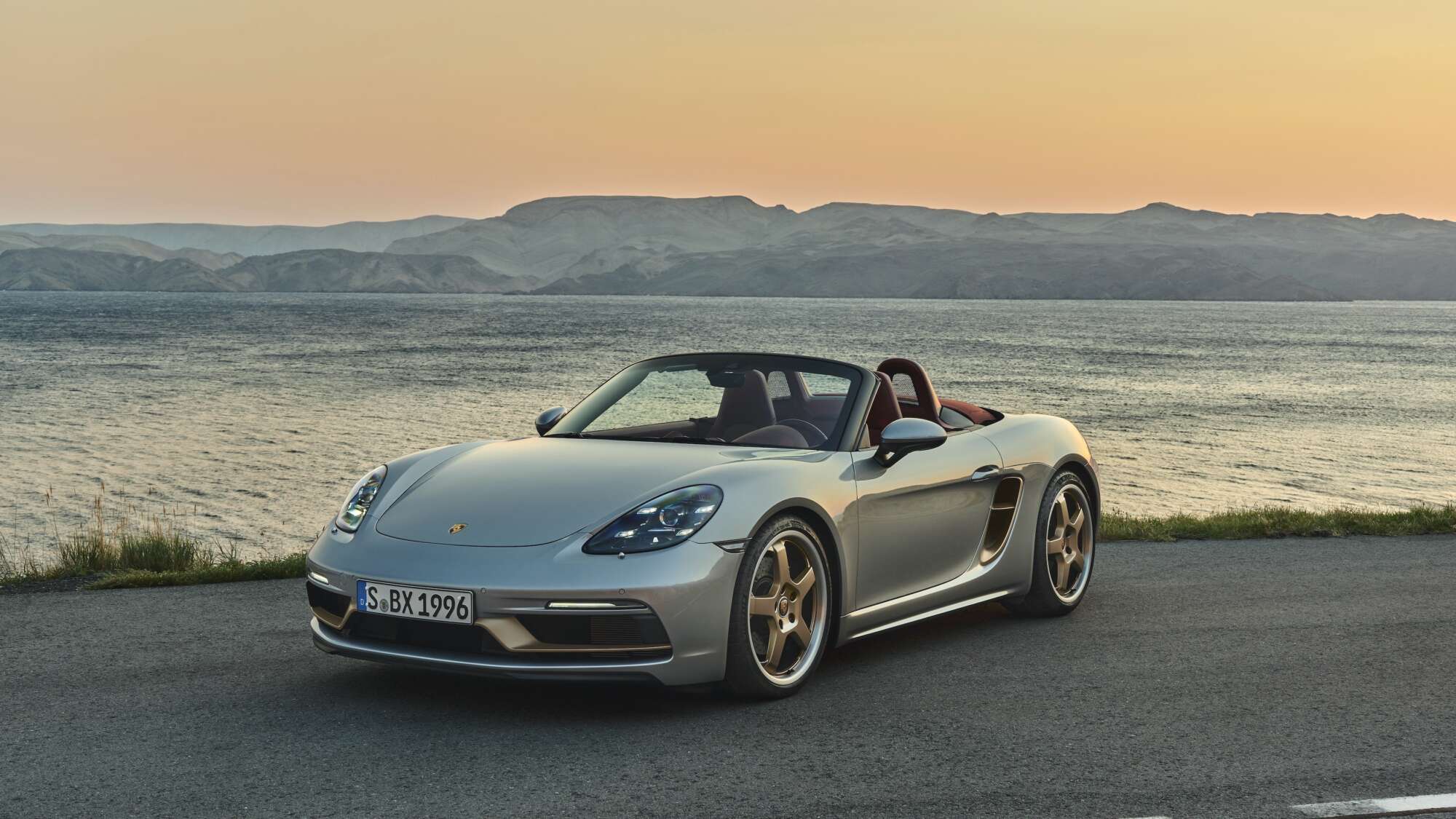 In our part of the world, people like to decorate the entrance of spouses homes in silver for their silver wedding anniversary. On the occasion of the Boxster’s 25th anniversary, Porsche is giving us something in silver as well. The color scheme of the special Porsche Boxster 25 Years model is reminiscent of the Boxster Concept from the 1993 Detroit Motor Show. To us, it seems appropriate to have a look back on a quarter of a century of the Porsche’s convertible mid-engined two-seater!

The Boxster was born out of necessity, but was an immediate box-office hit

In the early 1990s, Mazda conquered the roadster market with the MX-5. Porsche was cash-strapped at the time and needed to make production more efficient. Board member Wendelin Wiedeking called on all departments to save money. Designer Harm Lagaay had the idea of producing two cars with as many shared parts between them as possible. In addition to the new 911, Lagaay wanted to produce a derivative of that model with the same front end.

The result was a roadster with a six cylinder boxer engine – the Porsche Boxster (986). Engines from 2.5 to 3.2 liters of displacement and 204 to 260/265 hp were offered, packaged in a thoroughly polarizing design. This was particularly true of the headlights with the distinctive S-curve. This later became Porsche’s trademark, also on the Cayenne, even though many people still talk about fried egg headlamps today. But as Lagaay himself once said, “After 320,000 fried eggs, the canteen can’t have been that bad!” The lightweight mid-engine sports car sold magnificently and is still worth a sin today. But beware: Prices have recently been on the upswing considerably!

At the end of 2004, the Porsche Boxster 987 was introduced as the logical next step

After pretty good sales figures of the 986, it quickly became clear that the model series should be continued. The 987 model was given a more handsome front end, again with design borrowings from the 911, and Porsche’s new design language also found its way into the interior. This gave the Boxster a much more mature and independent appearance. While the engines at the model launch were still based on those of the predecessor, significant changes were made in 2007 and 2009. From 2009, the Porsche Boxster S even received DFI direct injection. The range here extends from 240 to 310 hp from 2.7 to 3.4 liters of displacement.

The second gen Porsche Boxster played a major role in establishing the Boxster within Porsche’s lineup for the long term. Gone were the days, when the Boxster was seen as the Porsche of the little man. Legends even arose that Porsche was holding the Boxster back a bit. Allegedly it was known that it drove better than the 911, thanks to its mid-engined balance. No matter how much truth there is to it, the Boxster impresses in its second series with fantastic handling and significantly improved interior quality. The first reasonable models start at around 20,000 Euros and offer quite a lot of car for the money.

Maximum headroom in its third generation – The Porsche Boxster 981

The Boxster’s third iteration, the 981, rolled off the production line from 2012 to 2016. With a much more pleasing side line and an independent front end, Porsche took a big step forward. From then on, the Boxster had a much more powerful and beefy appearance without sacrificing elegance. As with its predecessor, the interior was adapted from the 911. The switches for the sports exhaust, PSM, etc. were placed on the center tunnel. Porsche also noticeably improved legroom in the two-seater.

Initially, there were DFI engines available with 2.7 and 3.4 liters of displacement and 265 or 315 hp, respectively. The GTS version with 330 hp followed in 2014. As the last hoorah of the 981, so to speak, there was the Spyder in 2015. It was equipped with the same 3.8-liter engine as the Cayman GT4 and the 911 Carrera, with a power output of 375 hp. As a result, the Boxster came ever closer to the Porsche 911 in terms of performance. And by the third generation at the latest, it had finally emancipated itself. No wonder that prices have remained very stable and good cars are still in the 40,000 euro range.

Every Porsche Boxster on Elferspot

The Boxster had just come of age and found its place in the Stuttgart model range, when Porsche took a risky step. The formidable six-cylinder engine was replaced by 2.0 and 2.5-liter turbocharged four-pots. However, more power (300/350 hp) and considerably more torque were not enough to make the cherished flat-six powered car a thing of the past. It was far from a flop commercially, but the roadster, renamed to Porsche 718 Boxster, didn’t really want to win over hearts.

Historically seen, it was a well-thought-out move. The original Porsche 718 fought way above its weight in the late 1950s and early 1960s. With its 160-hp air-cooled four-cylinder boxer engine, the 718 RSK even took 3rd and 4th place overall in the 24 Hours of Le Mans. And putting all the love for the classic flat-six engine aside, the flat-four was the foundation for the first fifteen years of Porsche’s company history in the 356. In the end, however, it’s no surprise that Porsche did offer flat-six 718 Boxsters with the 718 Spyder, the 718 Boxster GTS 4.0, and now the 25th anniversary special model.

Boxster 25 Years – An homage to the Boxster Concept

GT Silver and Neodyme is the name of the exciting color combination of the anniversary model. In almost identical form, it already turned a lot of heads at the Detroit Motor Show in 1993. The wheels, side air intakes and front bumper were accented in the noble, copper-like shimmering color. But Deep Black and Carrera white are also available. The 4-liter engine offers up to 400 hp and can even be combined with three pedals and manual transmission if desired.

Other similarities to the concept car can be found in the burgundy interior and the red soft top. All the special equipment that makes a driver’s heart beat faster is on board as well: In other words, Porsche Active Suspension Management (PASM), Porsche Torque Vectoring (PTV), and a mechanical limited-slip differential come as standard. Sounds like a wonderful recipe for a lot of driving fun. Especially since the 718 Spyder is already beyond reproach anyway. But if you want one, you’d better hurry up – the Porsche Boxster 25 years is limited to 1,250 units!

Share "Happy Birthday – 25 years of Porsche Boxster" with your friends!